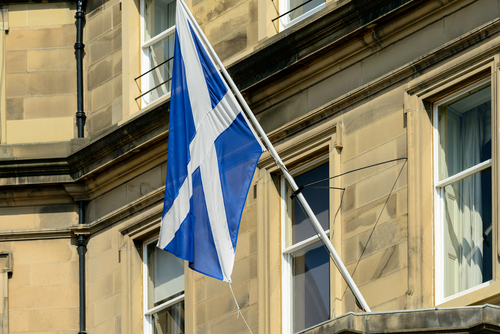 The Scottish Saltire flag on a flagpole outside a sandstone building in Edinburgh, Scotland.

Brussels (Brussels Morning) A special parliamentary committee concluded that Scotland’s First Minister Nicola Sturgeon “misled” lawmakers about her meeting with her predecessor Alex Salmond, according to unnamed sources, The Guardian reported on Thursday.

By five votes to four, the committee concluded that Sturgeon’s account of her meetings with Salmond in 2018 was “incorrect” and that her claims under oath earlier this month were “inaccurate.”

The special committee did not determine that she misled the parliament “knowingly”. Were that the case, it would constitute a breach of the ministerial code and require her resignation.

Sturgeon’s claims about Salmond were made as part of a process in which her predecessor had been accused of sexual misconduct, a charge he was acquitted of, resulting in the government having to pay more than 500,000 pounds for his legal expenses.

Interviewed by Sky News on Thursday, Sturgeon doubled down on her inaccurate and misleading claims, asserting that “opposition members of this committee made their minds up before I uttered a single word of evidence”.

“Let’s wait and see the final report”, Sturgeon urged, noting that “the question of whether or not I breached the ministerial code is being considered independently” by Ireland’s former Director of Public Prosecutions, James Hamilton.

The leader of the Scottish Conservative Party, Douglas Ross, announced the party would wait for the release of the final report on Tuesday, but stated his belief that Sturgeon had misled lawmakers and should step down.

“We have called out the First Minister based on the overwhelming evidence that she misled parliament,” he said. “We will continue to hold her to the same standards as previous first ministers of Scotland and demand that she resigns.”According to unnamed sources, Sturgeon’s party colleagues on the special committee insist she did not mislead the parliament, while Independent, Conservative, Labour and Liberal Democrat members have concluded the opposite.