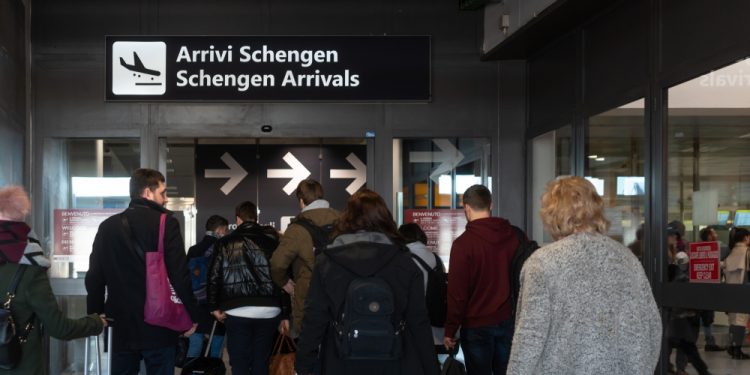 Passengers arriving at Ciampino airport go through the entrance for Schengen arrivals.

Brussels (Brussels Morning) Marking the 35th anniversary of the Schengen area, the European Commission will assemble the first-ever Schengen Forum today with MEPs and home affairs ministers in attendance.

The anniversary comes at a sensitive time, following terrorist attacks in France, which prompted President Emmanuel Macron to call on EU reforms to the concept of free movement.

The discussions at the forum this year will feed into the strategy for presentation in mid-2021.

Also happening on Monday is an address from VP Commissioner Margaritis Schinas to the digital German Medicines Manufacturers Association Conference, a few days after the Commission announced its pharmaceutical strategy on 25 November.

Manufacturing capacity in the bloc has proven feeble since the onset of the COVID-19 pandemic, an issue the pharma strategy intends to address.

Another impact of COVID-19 has been felt by the arts and culture sector. On Tuesday, research and innovation commissioner Mariya Gabriel will attend an informal meeting of culture ministers where they’ll discuss potential recovery measures.

Back in April, the Commission set up two platforms to help share challenges and solutions at the EU level regarding COVID-19’s impact on the cultural and creative sectors.

The first platform was tailored for Culture ministries across the bloc, while the second was geared toward helping workers in the cultural field share information and solutions more easily.

Transparency Commissioner Vera Jourova will convene with media freedom organisations on Tuesday as well, where they will likely debate the crux of the upcoming Media Action Plan, foreseen by the end of the year.

A study commissioned by the Commission in the summer, covering 2018-19, concluded that there had been a general stagnation or deterioration in media pluralism across all EU states.

Also this week, on Tuesday, the Commission celebrates the 10th anniversary of its foreign affairs branch, the European External Action Service (EEAS). Expected is an online debate between the EU high representative Josep Borrell and his predecessors Federica Mogherini and Javier Solana.

On Thursday, Breton will talk with the CEOs of Huawei Worldwide and Huawei Europe. Currently the EU is rejecting Chinese equipment from 5G networks, which has seen a number of EU countries restricting Huawei from their markets amid fears of Chinese spyware.

With the Portuguese Presidency coming closer, Ylva Johansson will be in Lisbon on Friday to meet representatives from the incoming Presidency, including Portuguese home affairs minister Eduardo Cabrita.