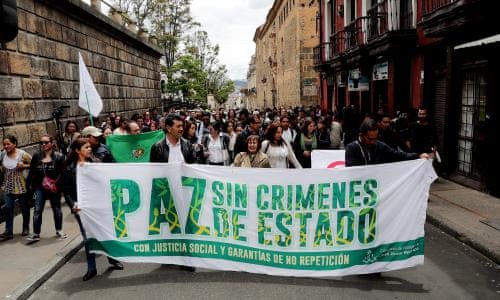 A wave of massacres in which dozens of people have been killed across Colombia has prompted fears that the South American nation remains unable to turn the page on its decades-long civil war.

In the latest incident, the bodies of three young men were found late on Tuesday near a road outside Ocaña, a city near the country’s eastern border with Venezuela.

The discovery marked the seventh massacre in two weeks. At least 39 people have been killed in the spate of violence that has stretched across the country.

On Saturday, six people were killed in Tumaco, a port city near the southern border with Ecuador, just days after the provincial governor warned that the region was descending into a “state of anarchy”. That same day, three people were shot dead near Medellín, Colombia’s second city, while three more were murdered in Arauca, in the country’s eastern plains.

So far this year, Colombia has seen 46 massacres, defined as the murder of three or more people in a single act of killing, according to local conflict watchdog Indepaz.

“We are living in a state of constant fear,” said one community leader near Ocaña who asked not to be named for fear of reprisal. “We know that we could be killed at any time, and that the government will do little to save us.”

The accord was supposed to bring with it increased security and development to Colombia’s poorest regions but such change has been elusive, with dissident Farc factions fighting for territorial control with a rival leftist guerrilla group, the National Liberation Army, ELN, rightwing paramilitary groups, drug cartels and the Colombian military.

The violence has been particularly felt by human rights activists, with more than 100 murdered this year, while the pandemic has also led armed groups to exert control. At least 30 people have been murdered for breaking quarantines, according to a local university.

Observers say that president Iván Duque – a skeptic of the peace deal he inherited when he took office two years ago – has not done enough to guarantee its implementation.

“The government has failed to follow the roadmap laid out by the peace deal,” said Sergio Guzmán, director of Colombia Risk Analysis, a thinktank. “And unless that changes and we see a genuine development and not just a military response, these killings will continue.”

Duque has blamed the recent bloodshed on drug-trafficking groups, and ordered the armed forces to be “implacable” in their response. He drew sharp criticism on Saturday, when he appeared to downplay the massacres by describing them as “collective homicides”.

While the current wave of massacres has prompted comparisons with the peak of the conflict in the late 1990s – when both massacres and murders were commonplace – analysts say that the current dynamics of the armed groups are more complicated.

“In the past you had clear ideological lines and motives, whereas now you have fragmented groups with their own fiefdoms,” said Gimena Sánchez, Andes director at the Washington Office on Latin America. “Unless we see a radical change in political will by Duque and the economic elites of the country, things will continue to deteriorate.”