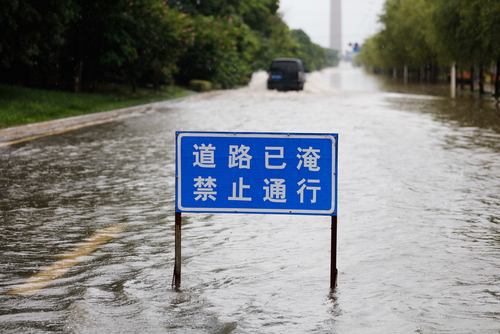 JIANGXI CHINA-July 1, 2017:Eastern China, Jiujiang was hit by heavy rain, and many urban areas were flooded. The vehicles were flooded, and the citizens risked their passage on flooded roads.

Beijing (Brussels Morning) China has decided not to attend the climate meeting hosted by the UK, where ministers from more than 30 countries are to discuss climate change action, the BBC reported on Wednesday.

According to the UK, China had been invited but decided against participating since relations between the two countries have become strained in the wake of disagreements over violations of human rights.

The CCP imposed the sanctions in response to sanctions that Western countries, among them the UK, imposed on the country over violation of human rights in Xinjiang Province.

Beijing did not specify why it opted out of the meeting. Given that some of the largest CO2 emitters including India, the US and the EU are attending, it was expected that China would attend as the largest emitter by far.

Not only do China’s emissions rival those of India, the US and the EU combined, its plans for the coming period are not environmentally friendly.

Richard Black, senior associate at the UK-based Energy and Climate Intelligence Unit climate activism organisation, noted that “China is a major lender, trading partner and diplomatic presence across much of the developing world”.

“As [US Special Presidential Envoy for Climate] John Kerry recently said, the logical approach of western nations is to carve out a constructive place to engage with China on climate change amid the very real differences on other issues”, Black noted. “It’s not yet clear if Chinese leaders will be prepared to go along with this”, he added.

Minsters from island states threatened by climate change are to attend the meeting and are expected to point out that while they do not emit much greenhouse gases, they can already feel the effects of climate change.