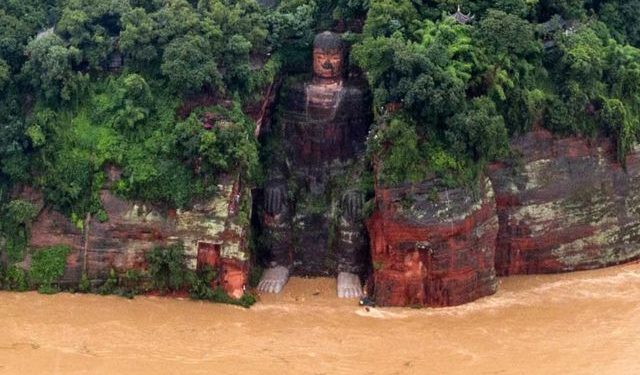 Floods on the upper reaches of the Yangtze river in south-west China have forced authorities to evacuate more than 100,000 people and threatened a 1,200-year-old world heritage site.

However, the worst of the flooding appeared to be over in Sichuan by Wednesday when the emergency level was lowered and the toes of a famous Buddhist statue re-emerged as waters receded.

Five people were missing in neighbouring Yunnan province in the south-west after a landslide destroyed two houses, the official People’s Daily newspaper said.

In Sichuan, 21 vehicles parked in a square in Yibin fell into a hole after the road beneath them collapsed in the middle of the night. No one was injured, according to media reports.

Flooding has left more than 200 people dead or missing in China this year and caused $25 billion in damage, authorities said last week.

The Yangtze water resources commission, the government body that oversees the river, declared a red alert late on Tuesday, saying water at some monitoring stations was expected to exceed “guaranteed” flood protection levels by more than 5 metres.

Water inflows at the Three Gorges project, a major hydroelectric facility designed in part to tame floods on the Yangtze, rose to a record 72,000 cubic meters (2.5 million cubic feet) per second on Wednesday, state media said. The inflow was expected to peak on Thursday at 76,000 cubic meters per second, the ministry of water resources said.

The sprawling Yangtze river city of Chongqing saw its worst flooding since 1981. Water covered roofs in low-lying areas of the historic town of Ciqikou, which was closed to tourists because of the rains from Tuesday evening.