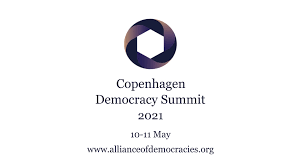 The embassy pointed out that the organisers had invited Taiwanese President Tsai Ing-wen and Hong Kong politician Nathan Law to the summit, claiming that this violated the One-China policy.

It described the summit as an “anti-China” activity organized by separatists and foreign forces to push for the independence of Hong Kong and Taiwan, and concluded that such efforts are “bound to fail”.

Addressing the summit, Denmark’s Minister of Foreign Affairs Jeppe Kofod and Tsai both emphasised the importance of democratic values.

Kofod revealed he was preparing a new security strategy and foreign policy based on democratic values, while he described China’s retaliatory sanctions against the EU as deplorable.

“We need to stand firmer, respond faster and stronger, when universal values like human rights and freedom of speech are under pressure”, he declared.

Tsai pointed out “we walked a long road to realize the freedoms we enjoy today and we are determined never to surrender these freedoms”.

The EU imposed sanctions against China for human rights violations against Uyghurs in Xinjiang Province, which some Western countries have decried as genocide. Beijing has rejected the accusations and responded with retaliatory sanctions.

The Danish parliament recently criticised the government for not reacting assertively to Beijing’s interference in Hong Kong. China maintains it is not trying to restrict freedoms in Hong Kong.

Relations between China and Denmark have improved since 2009, when former Prime Minister Lars Løkke Rasmussen met with the Dalai Lama, the Tibetan spiritual leader characterised by Beijing as a dangerous separatist.