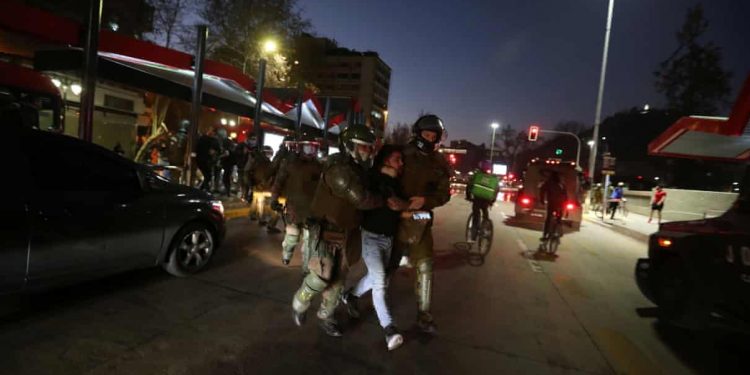 Violeta Delgado was at a protest over food shortages under Chile’s coronavirus lockdowns when the police arrived and fired off a volley of teargas rounds.

Delgado, who was seven months pregnant, says she put her hands up to show she was unarmed, but was struck by a police vehicle and knocked to the ground.

“I couldn’t feel my legs, my friends dragged me to a nearby clinic,” she said. “We thought they were going to kill us.”

The pandemic has forced many Chileans out of work, and – with only a meagre social safety net – residents of poor neighbourhoods are living in destitution. But demonstrations over hunger have been met by violent repression, according to activists and human rights groups, who say that police have used the enforcement of quarantine orders as a pretext for a crackdown on protest.

“It’s getting worse,” said Ana Piquer, executive director of Amnesty International Chile. “More people are out of work, more people are protesting, so there is more repression. It’s a very direct relation.”

Military and the police have roamed the streets to enforce lockdown since March, in scenes reminiscent of the official response to last year’s wave of protests against inequality.

Over six months, millions of Chileans took to the streets over a range of issues, from inadequate pensions and the privatisation of healthcare and education. Protests were met with violent and sometimes deadly repression from security forces, including accusations of torture and sexual assault.

More than 30 people died and thousands were wounded, including at least 465 people who were shot in the eye by crowd control weapons.

The human rights violations in turn drove new unrest – and activists say they have continued under the guise of enforcing pandemic orders.

Delgado did not suffer permanent injuries and her baby was unharmed, but she is pursuing legal action against the police. When asked for comment, the Carabineros police force denied her accusation, and said there was insufficient evidence for further investigation.

But Amnesty International has gathered numerous accounts of arbitrary detentions and abuse including the indiscriminate use of teargas and rubber bullets against people breaking curfew.

In one notorious case, a woman seeking help from police after being raped, was herself arrested for breaking curfew.

In a separate incident a woman suffered a miscarriage after being detained by police while walking outside her house in late March.

According to the Carabineros,163.957 people were detained for “crimes against public health”, between 19 March, when obligatory quarantines began, and 2 August.

Arrests in their thousands are still happening on a daily basis.

Piquer described one case where a detainee was threatened by police, who said “we want to take you to a nearby hospital so you get the virus”.

“They are criminalising protests and people organising in any way – including soup kitchens,” said Piquer. “The pandemic has shown to what extent the inequalities in Chile translate into human rights violations.”

Gonzalo Carpintero, who volunteers delivering ingredients to soup kitchens in Santiago’s El Bosque neighbourhood, has taken part in a number of hunger protests despite facing teargas and “non-lethal” firearms from police.

He said the government’s measures to help vulnerable families – including care packages and a freeze in bill payments – do not provide enough support. Neighbourhood soup kitchens started as early as March but the government only began to send food relief in May.

“We protest against the lack of support. The government wants people to stay at home, but how do they expect us to survive?” he said.

“You go out to ask for bread or say you are hungry, and in response they shoot teargas.”