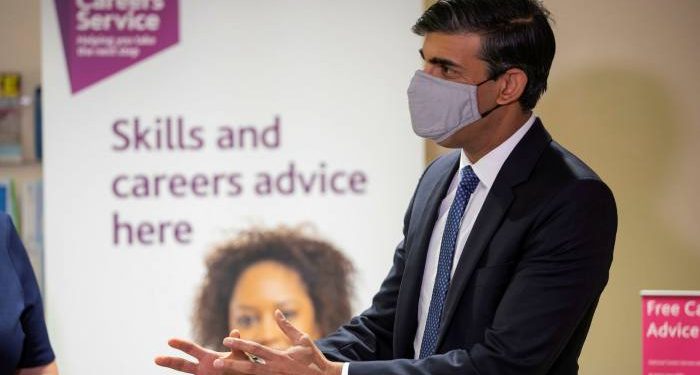 London (Brussels Morning) The UK Chancellor of the Exchequer Rishi Sunak has extended the government’s job support scheme a further three months in light of the continuing pandemic and pause to British businesses.

The Conservative government first initiated the furlough scheme, subsidising 80 percent of employees’ wages, to dissuade business owners, executives and managers from laying off workers while they took an economic hit in March’s lockdown.

The scheme was due to end last month, being replaced by a less generous funding programme to save fewer jobs. Faced with a second wave of infections and increasing restrictions that culminated in another nationwide lockdown commencing Thursday, the government extended the scheme until December before its latest decision to offer the package for what will be a full year.

Further funding will also be made available to self-employed workers.

“Extending furlough and increasing our support for the self-employed will protect millions of jobs and give people and businesses the certainty they need over what will be a difficult winter”, said Sunak.

Some people have questioned the logic of the move, arguing it kills the economy and sacrifices spending on other crucial areas such as health services.

Lance Forman, a former MEP for London, wrote on Twitter:

“Question for @RishiSunak Lockdown is aimed at protecting the NHS Furlough costs the Gov £14billion per month. Nightingale hospitals cost £220million You could build 63 hospitals for the cost of 1 month lockdown Why haven’t we built hospitals instead of killing the economy?”

Some welcomed the move but denounced the delays in reaching the decision.

“Support for firms and workers through a difficult winter is welcome, but it is hard to conclude that the messy process of returning economic policy to full lockdown mode via a two-month, five-stage U-turn is anything other than deeply sub-optimal”, said Torsten Bell, chief executive of think tank the Resolution Foundation.

Coronavirus cases have surpassed one million in the UK, with over 48,000 deaths due to the virus.

Official figures show that the UK’s economy contracted 20 percent in the second quarter.

The Bank of England has worked to help manage adverse effects on the economy by reducing interest rates and adding to quantitative easing, announcing a further 150 billion pound cash injection on Thursday.