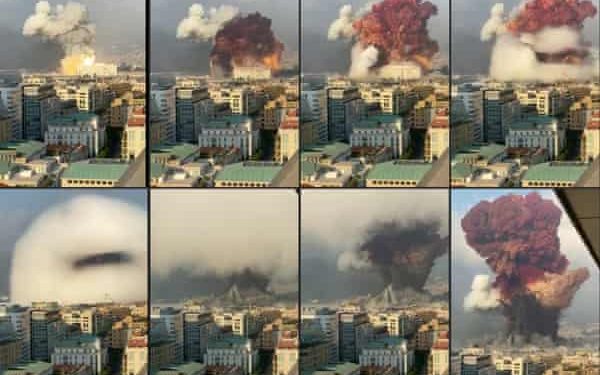 The first violent jolt seemed like a neighbourhood accident; a blown generator, or a car crash. Five seconds later, the thundering secondary blast arrived; a crushing surge of energy that instantly sucked the air out of the city, then plunged it back with devastating weight. Giant shards of debris blew through rooms, door frames collapsed and furniture became missiles – all in what seemed like a paralysing slow motion.

A deathly still followed, and then came a cascade of shattered glass from what appeared to be every home, or tower block; hundreds of thousands of panes and pieces falling to earth at once. Many who survived the blast wave did not live beyond the seconds that followed. Days later, giant pools and trails of blood littered pavements and roads, each telling their own tale of life or death in Beirut’s apocalypse. When the glass stopped falling, the screaming started. A yellow pall of dust, smoke and chemicals shrouded the eastern suburbs.

A car bomb had exploded, people shouted. But here? Why here? And why so huge? In a city accustomed to the savage aftermath of explosions, this was different. The road down the hill from the suburb of Achrafieh to the waterfront was in ruins; wrecked cars and mounds of glass. “They’ve killed Saad Hariri [the former prime minister],” shouted a guard outside the villa of Nissan executive Carlos Ghosn, who fled Japan earlier this year.

“It’s the port,” said another guard pointing to a yellow and pink mushroom cloud that was just starting to dissipate in the face of a westerly wind. “It’s been blown up.”

The chaos of heat, panic, ruins and traffic was quickly yielding to a new reality; things here would never be the same again. As night drew across what remained of a darkened Beirut on Tuesday, what had caused such catastrophic damage – nearly 2,750 tonnes of ammonium nitrate, stored in a flimsy shed at the entrance to town – had become clear.

Five days later, what ignited the huge stockpile is also taking shape, as is the litany of failings that led a shambolic government to expose its people to such mortal risk for more than six years, since the nitrate was seized in lieu of port dues from a rickety Russian freighter.

Divining outcomes from a multitude of past crises is fraught in Lebanon, where problems are usually more easily deduced than cures. But never before, during empire, world war, the troubled birth of the modern state, insurrection, civil war, occupation, and rampant kleptocracy has a resolve been so clear about what must happen next. Something new and terrifying had taken place. A moment of reckoning – and social impetus – like no other looms in Lebanon.

“If this doesn’t break the corrupt system, nothing will,” said Nidal Ayyoush, 36, a supervisor in a bank. “How can the same people that have led us sleepwalking to Armageddon be the ones to lead us out of it?”

The storage of ammonium nitrate at the port – of all places – for so many years shows they were keeping it there for a reason,” said Hikmat Abdullah, co-owner of a real estate firm. “That’s both because everyone knew it was important. Every big player in Lebanon knew it was there, including Hezbollah, who run the port. They are lying when they say they don’t.”

Over several decades, the port of Beirut had been a site where disparate political and commercial interests converged. Billions of dollars had flowed through it annually. “Here the oligarchs and the political chieftains and their financiers ran one of the biggest rackets in the Middle East,” said a recently retired Lebanese intelligence official. “It financed the rot of the state, at the same time as destroying it. But nobody was expecting this.”

A gathering rage across the country is leading many Lebanese to believe that the events of 4 August could finally be the tipping point that has been predicted before, but never materialised. The assassination of former prime minister Rafik Hariri in February 2005 was another such moment. The weeks afterwards led Syrian forces occupying Lebanon at the time to withdraw, and gave birth to a political dawn that promised to usher in sovereignty and accountability.

But in the years of regional chaos since, Lebanon has remained captive to broader conflicts, and an incorrigible ruling class, which has turned all state institutions into fiefdoms, looting tens of billions of dollars in state funds. Earlier this year the state defaulted on the first of a series of Eurobond repayments and people watched helplessly as the local currency collapsed, wiping out the savings of many and sending much of the country into poverty.

The needs are now so great, and the corrupt superstructure of government so determined to dig in, that in the eyes of many Lebanese, something has to give. “Power may really be slipping from their hands this time,” said Layla Habib, 22 a student protester. “I can feel it.”

Throughout the decay, Hezbollah has consolidated its position as the strongest force in the land, and one of the most formidable militant organisations in the region.

Though the group has MPs in the government where it uses alliances to hold sway, it also wields power away from the legislative process. Hezbollah’s hold on the Lebanese state has made it all but untouchable in Lebanon, where even as it faces a period of intense scrutiny, other groups are wary about opening political, or military, fronts.

“And at this stage, I think the priority is to get rid of mobsters,” said Nadim Houry, executive director of the Arab Reform Initiative. “You can’t defeat the mobsters and Hezbollah at the same time. So to me, that is the only possibly hopeful scenario. Hopefully, new political forces would be sufficiently organised to win elections and start renewing political life on a new basis. But for now, the main thing is to get the criminals out.

“The risk is that some anti-Hezbollah may be hoping to use this to finally corner the group into submission. That would be a massive mistake. Not because of any sympathy to the group, but because the country cannot afford such a confrontation.

“Next step [is] in a salvation government from outside the political class with a special mandate to address the humanitarian and economic crisis. They need a limited mandate, two to three years max, and their duty would be to prepare for elections on the basis of a new electoral law after that period.”

As an anguished week drew to an angry end, calls for mass resignations from the parliament intensified, as did demands that the probe into the events leading to the explosion not be politicised by leaders invested in its outcome.

“The government must resign,” said Maha Yahya, director of the Carnegie Middle East Centre. “The Lebanese, even those initially willing to give it a chance, have zero trust in the political class: What happened is catastrophic and the result of criminal negligence, epic mismanagement and corruption that eats at the heart of Lebanon.

“In its stead the political parties should endorse a government of independents that has the trust of the Lebanese people and that has exceptional powers to lead the country out of this abyss. Accountability of the crime cannot stop at a few port employees. It must follow the chain of command.”

Mass resignations from the country’s parliament do seem almost inevitable, as does a vacuum that would need to be quickly filled. The installation of an interim leadership, potentially topped by the military, is being widely mooted – a move that would pose a serious challenge to patronage structures that an elite in the background would try to salvage.

“The only way out of this deadlock is for MPs to resign and an interim government be formed with one purpose – and that is to stabilise the situation and help aid arrive,” said Khaled Zaidan, 48, an investment banker. “With all of their issues the army is the most credible institution to lead us at the moment. We want an independent committee that needs to be created to make a new electoral law under international supervision.”

On Friday, three days after the explosion, a verdict was due to be handed down in the trial of four alleged members of Hezbollah accused of assassinating Hariri on the Beirut waterfront, more than 15 years ago. The impact of the killing, regarded at the time as a watershed moment, had gradually faded, subsumed by one crisis after the other, culminating in an economic implosion that was more than most could withstand. Interest in Lebanon had dried up. So too had regional and foreign aid, which was now knotted to demands for structural reforms, which politicians – even now – are refusing to make.

But not only was last week’s explosion bigger by an order of magnitude than anything the country has seen before – so too is the fallout.

After he stood in the ruined Gemmayze district, less than a mile from ground zero, a place no Lebanese politician would dare go, French president Emmanuel Macron said: “It’s time for responsibility in Lebanon. We raised funds in the past, but we can only do it if the Lebanese authorities take their responsibilities to allow us to fully help Lebanon.”

Around the same time, Lebanese president Michel Aoun said the explosion had ended the aid blockade on Lebanon – a remark seized on by Beirutis as evidence of the leadership thinking that reforms no longer mattered. Macron was having none of it. “I guarantee you this aid will not go to corrupt hands,” he said.

As the clean-up continued in Gemmayze and elsewhere, led mainly by young volunteers with brooms and shovels, one shopkeeper said: “They’re misreading things if they think they can get away with this just because people are sending aid. If I have to lose my livelihood in sacrifice for a new state, then let it be,” he said. “But I won’t accept this being for nothing.”

In the downtown area, destroyed during the civil war and rebuilt by Rafiq Hariri who, together with his backers, reaped an enormous bounty from doing so, there was little recovery under way. Already empty shop fronts had been blown out.

“There’s no community here, just new money that disappeared,” said Mazen Sheikh, who had been stationed at an abandoned mall as a bodyguard. “We need to rebuild Beirut community by community. That’s the only solution.”