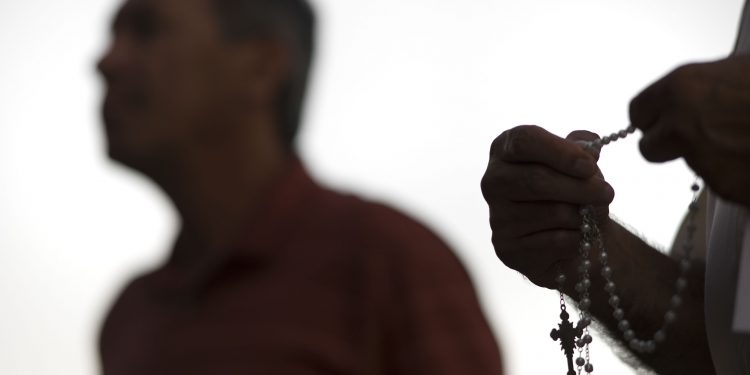 An attendee prays the rosary Oct. 1 during a public session on the issue of clergy sexual abuse at Our Mother of Confidence Parish Hall in San Diego. An abuse survivor in the Diocese of Syracuse, N.Y., is donating a large portion of a $5,000 settlement he received to help out two food pantries and is spending the remainder of the money to have special Masses offered in every parish in the diocese for other abuse victims and for priests accused of abuse. (CNS photo/David Maung) See ABUSE-SETTLEMENT-MASSES-PANTRIES Oct. 3, 2018.

London (Brussels Morning) An inquiry report into child sexual abuse found that the catholic church placed its reputation ahead of children’s safety.

The Independent Inquiry into Child Sexual Abuse was set up to investigate institutional failures as high-profile instances of child sexual abuse came to light, sparking concern for ongoing failures in the protection of children.

Last month it published a report into the Anglican Church.

Findings published yesterday iterated the Catholic church in England’s “neglect of the physical, emotional and spiritual wellbeing of children and young people in favour of protecting its reputation was in conflict with its mission of love and care for the innocent and vulnerable”.

The 162-page report also condemned those who “turned a blind eye”, putting the spotlight on Cardinal Vincent Nichols, the head of the Catholic Church in England and Wales.

Nichols “demonstrated a lack of understanding” of the impact of abuse, it read.

The 75-year-old archbishop said he was “ashamed at what has happened in the context of the Catholic Church”.

“I want to promise you again that we will do every single thing in our power to get our response right. I am very sorry”.

While numbers are likely to be higher, the report said there were 931 allegations of child sexual abuse in the Catholic Church between 1970 and 2015, affecting 1,753 individuals.

One victim estimated he had encountered hundreds of incidents of abuse between the age of 11 and 15 and was made to make confession after each one.

“…the priest concerned made it plain that his sister’s place at a local convent school depended on his compliance”, reads the report.

A number of recommendations were stipulated in the document, including mandatory safeguarding training, refresher training on the impact of child sexual abuse, canonical crimes in child sexual abuse cases to be redrafted as crimes against the child and not adultery, a national policy on the handling of complaints regarding safeguarding cases, and for a lead on safeguarding to be appointed to key institutional bodies.

It did acknowledge, however, improvements had been made in the church’s response but that it needed to further “embed a culture of safeguarding”.