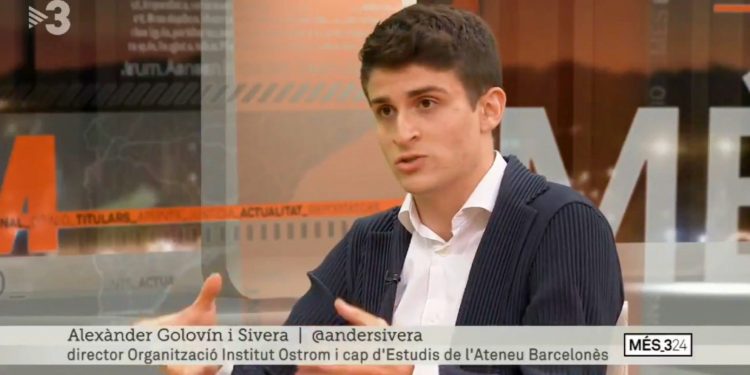 Barcelona (Brussels Morning) Alexander Golovin, a 22-year-old Catalan man who does not possess any completed tertiary education degree, has been appointed public adviser for the regional government’s Department of Research and Universities. The appointment has sparked controversy in Spain, especially due to his awarded salary of €58,000 – a figure more than twice that of the national average.

The Generalitat (Catalan Government) confirmed Golovin’s appointment on Thursday last, naming him “special assessor in the field of strategic policies of the Department of Research and Universities.”

Describing the 22-year-old’s responsibilities, the Minister for Research and Universities, Gemma Geis from Junts per Catalunya (Junts), said they included making territorial visits to municipalities and regional councils to “connect and evaluate aspects related to policies centred around universities.”

Golovin, who was born in 1999, has not completed any tertiary education. Having started a bachelor’s degree in International Relations at Ramon Llull University, he dropped out soon after. Until now he has been studying Hebrew studies at the University of Barcelona (UB), and has said he intends enrolling for his third year, despite admitting to being “a little late.”

Negative reactions about the assignment relate not just to Golovin’s age and lack of experience but also cite his publicized market liberal ideology and his promotion of Institut Ostrom—a Catalan liberal think tank.

Institut Ostrom, where Golovin was a programme director up until his appointment by the Generalitat, has consistently advocated for the “professionalisation of administration”, meaning the privatization of public sectors such as secondary education. Golovin — and Ostrom — have publicly criticized government subsidies, reductions in university tuition fees, laws regulating the price of rents, and have come out in favour of a generalised tax reduction.

In 2017, Golovin tweeted “Liberals do not accept public subsidies for consistency. If you want to grow the Catalan liberal project, become a member of Catalans Lliures (Catalan Liberals).”

The irony behind Golovin’s liberal criticism of government subsidies and his recently awarded generous, tax-payer funded salary has stirred outrage amongst many Catalans.

Journalist Pilar Carracelas reacted on Monday saying: “The worst is not that the Generalitat signed someone who does not have a career as a University Adviser. The worst thing is the hypocrisy of these chichinabo liberals who embrace the capitalism of friends because they have friends in the public breast.

So far, the Republican Left Party of Catalunya (ERC), which forms half of the coalition government with Junts, has yet to comment on the controversial appointment. ERC and Junts, allies in the common fight for Catalan independence, traditionally favour somewhat different political ideologies. While the two parties share much the same outlooks on social matters, ERC are considered more left-leaning than the Junts, who appointed Golovin, and are considered to be more liberal.