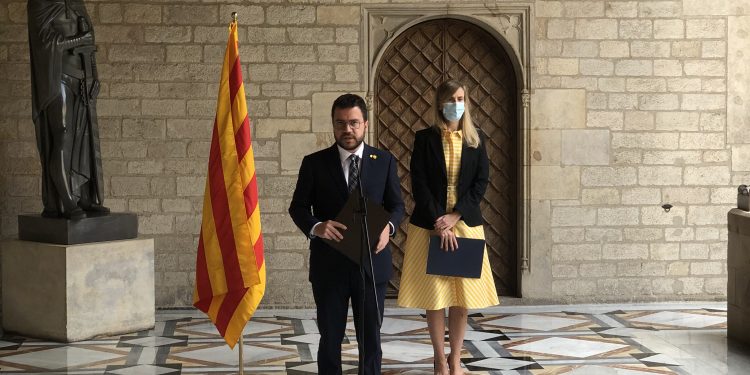 (Brussels Morning) The President of the Generalitat or Catalan government, Pere Aragonès, has stressed anew the importance of bilateral talks or dialogue with Madrid as the only way to achieve his two principal objectives: amnesty and another referendum.

At a press conference marking the fourth anniversary of the controversial 1 October, 2017, referendum, Aragonès reaffirmed his deliberative approach to negotiating with Spain on the Catalan process, stating that he remains determined to provide another independence referendum for Catalonia and amnesty, rather than pardons, for the ex-Catalan leaders. He avoided offering a date for the next referendum, saying that “the conditions are more important”.

Asked whether the political conflict around the Catalan process—especially given the internationally reported arrest of exiled former Catalan president Carles Puigdemont in Italy—was causing apprehension among foreign investors about the region, Aragonès emphasised Catalonia’s attractiveness for foreign partners, regardless of domestic political feuds.

“We are working with European funds on several projects. We have secured 27 projects related to the automotive industry, food industry, and the energy sector, including the semiconductor industry and green infrastructure.”

Aragonès was joined by Catalonia’s minister for Foreign Action, Victòria Alsina. Alsina, who recently met with officials from the port of Barcelona. The port offers a potential boost to trade with Europe since, ten years on, Catalonia still awaits a planned freight railway line that has yet to materialize because of political tensions with Madrid.

The lack of railway infrastructure means that thousands of trucks clog the region’s roads and are a major cause of pollution, a drawback to Catalonia’s 2030 agenda of achieving vital Sustainable Development Goals (SDG).

Alsina endorsed Aragonès’ deliberative approach to the Catalan process: “In terms of what we want in some sectors, we have the bilateral table to have a conversation about the next moves”, she said. “We will continue to move any project which is good for Catalonia and for civil society,” she concluded.

Four years ago, on 1 October, Catalonia held an independence referendum which was ruled unconstitutional and illegal by Spain’s central executive and judiciary. Police despatched to the region to physically stop citizens from voting were cited for using excessive force in doing so. Their actions were widely condemned and served to fuel further cries for independence.

In 2019, nine Catalan political and social leaders were sentenced to between 9-13 years in prison for their involvement in the referendum and for what the Supreme Court claimed was mismanagement of funds and sedition. Carles Puigdemont, president of the Generalitat at the time of the referendum, fled Catalonia and has been living in exile in Belgium since.

The current president, from the Republican Left Party (ERC), champions a “dialogue approach” towards the Catalan process, whereas the other half of the ruling coalition, Junts, the party of Puigdemont, takes a more unilateral approach in addressing the conflict with the Spanish government.

Given what some perceive to be the tense political situation in Catalonia — the arrest of the former leader coupled with the anniversary of the violent events associated with the referendum of 2017 — concerns have been expressed about possible disturbances in the region over the weekend.