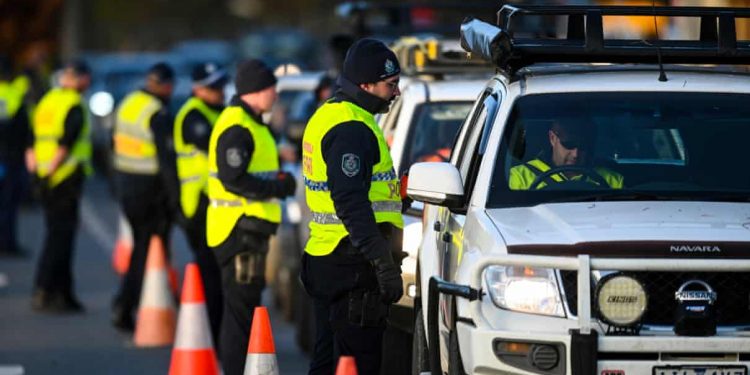 Canberrans stuck at the Victorian border have been given four days to return home, after New South Wales relented on its decision to prevent them transiting through the state.

The New South Wales health minister Brad Hazzard said a resolution had been reached on Wednesday, and that drivers must take a direct route and only travel between 9am and 3pm.

The decision appears to have ended a six-day stand-off that had prevented a cohort of Canberrans from returning home for two weeks’ quarantine, despite being cleared to transit through by both the NSW and ACT governments.

“There has been an issue obviously with some of the ACT residents who have been caught up in Victoria,” Hazzard said. “We’ve made arrangements with NSW police, those residents will have four days to come on back from Victoria via direct route.

On Tuesday night, the ACT government advised residents experiencing “significant and immediate financial difficulties” to contact a dedicated hotline for support and advised them to seek “professional help” if the situation was affecting their mental health.

The NSW premier, Gladys Berejiklian, had previously refused to apologise for stopping the Canberrans, saying she was taking steps to protect her state.

The comments infuriated Anne Cahill Lambert, a health worker who, along with her husband, was working in the Victorian health system before the failed attempt to return home.

Cahill Lambert told the Guardian that the NSW decision to allow Canberrans through was welcome, but that she will be “happier to get the formal advice with a new permit”.

“I should say that this approach to Australia was not what our forefathers … had in mind,” she said. “The premier made no apologies for keeping NSW people safe, but she was doing this at the expense of other Australians by wanting to send them to the [second] epicentre of the pandemic to fly to Sydney.”

“This is tribal rather than Australian.”

On Wednesday, Barr said the concerns of NSW were legitimate, but that the ACT had presented numerous options to safely return the residents. One of those options was offering a police escort from the border to the ACT, where residents would immediately go into at-home quarantine for two weeks.

Barr said the dispute was centred on where the residents would take a rest stop on their way home through southern NSW.

NSW did not want the residents to refuel or take a stop anywhere it would endanger local communities along the Hume Highway.

“We believe there is such a stop, it’s about 4km north of Dog on the Tuckerbox, near Gundagai … it is one of the highway rest stops that doesn’t have commercial facilities, it’s just simply a layover.

“Because it is 4km north of the Dog on the Tuckerbox, that’s where most people stop, these Canberra drivers could comfortably get to that spot and not to interact with any NSW residents.”

The travellers were left stranded by a sudden change to NSW travel restrictions last week, which required anyone travelling to NSW from Victoria to go through Sydney airport and quarantine there, at their own expense, for two weeks.

The changes – which NSW initially advised would not affect ACT residents – effectively required Canberrans anywhere in Victoria to travel back through the Melbourne hotspot, abandon their cars, belongings, and pets, and fly to another hotspot in greater Sydney instead of taking the short journey from the Victoria-NSW border by car and going straight into quarantine in the ACT.

ACT and NSW health authorities appeared to have reached an agreement on Saturday morning, but NSW reneged soon after.

Barr said it was not difficult to conduct the trip safely and without interacting with NSW residents.

“They just want to come home. They’re coming home to quarantine. They’re staying in their car and they can safely get to the ACT,” he said. “It’s not that difficult.”

No such issued have stopped federal politicians making the same journey.

Victoria-based federal MPs were granted exemptions to travel to the ACT to begin a two-week quarantine before the resumption of parliament on 24 August.

Barr said there had been “no satisfactory answer” as to why federal MPs were allowed through while ordinary citizens were blocked.

“[It’s] an excellent question and one that we have been asking as well,” he said.

“There hasn’t been a satisfactory answer to that question. But what I would say is that we spent weeks in the lead up to the sitting of federal parliament working with the various health authorities, including our own, because they’re all coming to Canberra to work on a safe way to manage the federal politicians’ transit.