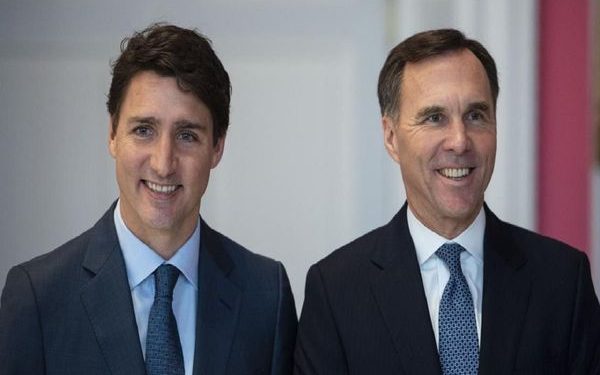 Canada’s finance minister has announced his resignation amid reports of differences with prime minister Justin Trudeau over spending to protect the economy during the coronavirus pandemic and allegations of conflict of interest.

Bill Morneau said he is leaving politics and has put his name forward as a candidate to lead the Organization for Economic Cooperation and Development.

Trudeau thanked Morneau for his five years as finance minister and said in a statement that Canada would support his bid to lead the OECD.

Morneau and Trudeau have reportedly butted heads amid spending to backstop the pandemic-hammered economy. Morneau said he was not asked to resign but added that he is no longer the appropriate the person for the job.

Canada’s government is predicting a historic C$343bn ($260bn) deficit for 2020-21 resulting from its economic plans to tackle the impact of Covid-19. Trudeau has called the spending a lifeline to Canadians battling to stay afloat.

Recent news that Mark Carney, a former governor of both the Bank of Canada and Bank of England, is advising Trudeau during the pandemic fuelled speculation that Morneau might be replaced.

Carney and deputy prime minister Chrystia Freeland would be considered favourites to replace Morneau but a senior government official told the Associated Press Carney was not a potential candidate.

Opposition parties have been calling for Morneau’s resignation over allegations that he had a conflict of interest in a controversy with WE Charity, and had to pay the organisation more than $40,000 in travel expenses it incurred on his behalf.

He told MPs in July: “I expected and always had intended to pay the full cost of these trips, and it was my responsibility to make sure that was done.

“Not doing so, even unknowingly, is not appropriate. I want to apologise for this error on my part.”

Morneau – two of whose daughters have either worked or volunteered for WE Charity – has also said he should have recused himself from discussions on the decision to task WE Charity with running a student grant program called the Canada Student Service Grant (CSSG).

“I wish that, in hindsight, that we had done things differently around the WE Charity,” Morneau said.

The WE charity scandal has also touched Trudeau, who has admitted he should have recused himself from a cabinet decision to award a contract to We Charity to administer money to students having trouble finding work due to the pandemic.

Trudeau’s family has worked for the organisation that won the contract to run the almost billion-dollar program. Trudeau’s wife, brother and mother have been paid a combined $300,000 Canadian (US$221,000) to speak at a number of WE events.

Nelson Wiseman, a political science professor at the University of Toronto, said Morneau’s resignation was not a surprise.

“By firing Morneau, Trudeau is hoping to take the attention off himself,” Wiseman said. “I don’t think the departure was a product of policy differences, although the prime minister’s office would like to make it so appear”, he said.

Morneau has been Trudeau’s finance minister since the prime minister took office in 2015. He is the former head of Canadas largest human resources firm, Morneau Shepell.