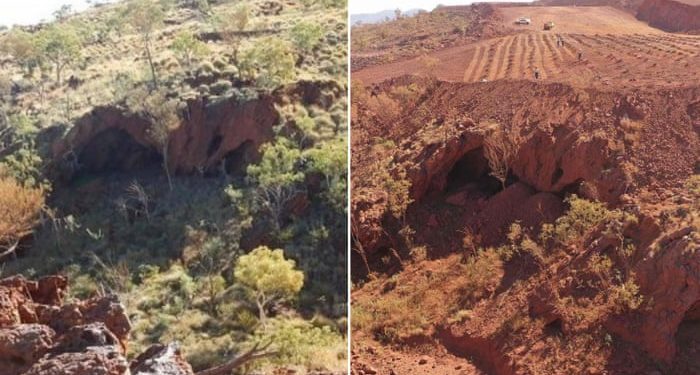 Calls are growing for mining giant Rio Tinto to take further action over its destruction of a 46,000-year-old Aboriginal site at Juukan Gorge, with witnesses telling a federal inquiry into the disaster there should be high-level “personnel changes” and compensation paid to traditional owners.

Rio Tinto on Monday said it would strip about $5m in bonuses from its chief executive, Jean-Sébastien Jacques, and about $1m in bonuses from the iron ore boss, Chris Salisbury, after the company “failed to meet some of its own internal standards and procedures in relation to the responsible management and protection of cultural heritage”.

The Australian Council of Superannuation Investors chief executive, Louise Davidson, told Friday’s parliamentary inquiry ACSI had met with Rio management to convey “that the reduction of bonuses does not meet our standard, and we are looking for signs from the company that they understand that”.

“We expect the [Rio] board to put in place processes to fix what’s gone wrong, but also to acknowledge the failings that have occurred and deliver proper accountability around that,” Davidson said.

“We won’t say person A or person B, but what we want is for the board to be really clear about how they are going to take responsibility and accountability for what’s occurred. We think the board should demonstrate how it is taking accountability further than just a financial penalty.”

Earlier, the world-leading anthropologist Prof Glynn Cochrane, who spent 20 years implementing Rio Tinto’s social performance program, expressed serious concern about the adequacy of Rio Tinto’s storage of 7,000 items salvaged from the Juukan Gorge site, saying he was “not sure they are being held somewhere safe”.

Cochrane said the items were sitting in a shipping container on the site, and it appeared they were salvaged on a tight timeframe and budget.

“It’s like blowing up the tomb of the unknown soldier and forgetting about the occupant,” Cochrane said.

In his view, there was an intentional weakening of the authority of senior experts and archaeologists in the company between 2016 and when Juukan Gorge was destroyed in May.

“They have done away with the community relations system we created in 1995,” he said.

“It’s all about branding, marketing and media. Those are the people they hired and employed in the Pilbara. I can’t see any evidence they are employing people to pay proper respect to cultural heritage.”

Cochrane said there was a conflict of interest when governments that received royalties and companies were both involved in decision-making about sacred sites in the path of mining operations.

Prof Marcia Langton told the inquiry compensation was due to the Puutu Kunti Kurrama and Pinikura (PKKP) people.

Langton said the agreement they had with Rio Tinto should be made public “so that a proper assessment can be made of whether or not it was breached, not only in relation to Juukan but also this matter of cultural heritage being stored in shipping containers on mine sites”.

“The gag clause that stops traditional owners from speaking about the terms of that agreement publicly combine to deprive Australians of transparency of these arrangements, and delivers to the mining company carte blanche to conduct its operations secretly.

“It may well be in breach [of its agreement] but neither the traditional owners nor the Australian public has any way of knowing.”

The National Native Title Council’s Jamie Lowe said the federal government should set up an independent national body to manage Aboriginal cultural heritage, from which traditional owners could seek protection for their important and sacred sites.

He said native title groups needed to be resourced to negotiate deals with industry, where there was currently an “extreme power imbalance”.

These prescribed body corporates aren’t funded by government, the NNTC deputy chair, Kado Muir, said, and they are overwhelmed with the demands of having to negotiate so many agreements concurrently with mining and other resource companies.

Under native title legislation, traditional owner groups have a six-month window in which to negotiate a land-use agreement.

Lowe said he shared concerns about the treatment of items salvaged from important sites.

“Our heritage doesn’t belong in a shipping container. It needs to be in a keeping place where our young people can visit it. It’s incredibly disrespectful … and just speaks again to the inadequacies of resourcing of our mob.

“We want to put our culture somewhere. If they’re going to remove it from the earth we should at least have a place to respect it.”