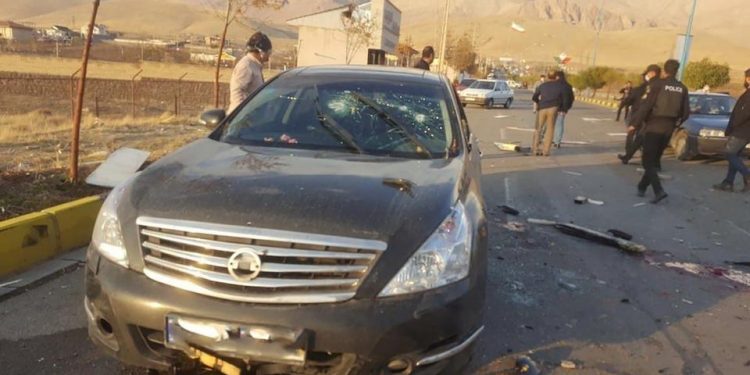 In his message, Supreme Leader Ali Khamenei called for prosecuting the perpetrators and continuing the work of the renowned scientist, adding that he was murdered by “brutal mercenaries”.

President Hassan Rouhani said his country would retaliate for the killing “at the proper time”, adding: “our people are wiser than to fall in the trap of the Zionist regime”, as Reuters reported.

Foreign Minister Javad Zarif called it an “act of state terror” with “serious indications of Israeli role that shows desperate warmongering of the perpetrators”. He also called on the EU to drop the double standards and condemn the assassination.

Calls for calm and restraint

The UN urged restraint in order to avoid an “escalation of tensions”.

“We urge restraint and the need to avoid any actions that could lead to an escalation of tensions in the region”, said a UN spokesman, quoted by Al-Jazeera. “We condemn any assassination or extrajudicial killing”.

In a statement by the Spokesperson for Foreign Affairs and Security Policy, the EU condemned the killing as a “criminal act” that “runs counter to the principle of respect for human rights the EU stands for” and urged maximum restraint. Similar calls were reflected by German and UK foreign ministry spokespersons, while a number of countries have vocally condemned the assassination, including Qatar, Turkey and Iraq.

Former CIA Director John Brennan took to Twitter to denounce a “highly reckless act” that could risk “lethal retaliation” and another round of escalation in the region. One of the most vocal critics of the Trump administration, he said in a second tweet that, if perpetrated by a foreign government, this would be an act of state-sponsored terrorism and flagrant violation of international law.

According to Iran’s semi-official Fars news agency, Fakhrizadeh was assassinated in Iran’s Absard province as his convoy came under attack. Authorities initially said that it was an ambush, as a truck exploded near the scientist’s convoy, after which gunmen opened fire on his car, killing him. Some reports stated there was an automatic machine gun operated with remote control, while witnesses told state TV that shooters were also on the ground.

It is not the first time Israel has stood accused of assassinating Iran’s nuclear scientists, widely believed to be behind a series of killings of Fakhrizadeh’s colleagues almost a decade ago.

Israeli Prime Minister Benjamin Netanyahu’s office has said it would not comment on the attack. But as Deutsche Welle notes, that Netanyahu once called out Fakhrizadeh’s name in a news conference saying, “remember that name”, has fueled speculation of the country’s involvement.

Leading scientist but not alone

Iran’s investment in nuclear research and knowledge dates back to the time of the Shah, and Iran’s clerical leadership following the 1979 revolution has never abandoned the program to acquire nuclear energy for civilian purposes.

On the contrary, it has largely invested in it. Fakhrizadeh had led the Islamic Republic’s military nuclear program before it was disbanded in 2003 when it was uncovered by the CIA and an Iranian exiled opposition group.

Today it actively pursues its uranium enrichment program as well as its ballistic missile program in response to the US withdrawal from the 2015 Joint Comprehensive Plan of Action (JCPOA), commonly known as the Iran nuclear deal. Although often accused by Israel and the US for secretly pursuing the quest for a nuclear weapon, the Iranian leadership has not gone as far as breaching all of the obligations stemming from the deal.

However, Fakhrizadeh’s assassination is seen more like a political one rather than a preemptive measure against any alleged imminent nuclear weapon.

Mark Fitzpatrick, associate fellow at the International Institute of Strategic Studies (IISS) and observer of the Iranian nuclear program notes: “However important his leadership role, Fakhrizadeh was not irreplaceable; over the past two decades he has mentored dozens of scientists who share his knowledge and mission. No doubt it would take Iran longer to produce weapons without him, but produce them it could. [..] Killing him was a political decision, heavily affected by the US election and the time left in Trump’s term”.

As LSE and SOAS research associate Massoumeh Torfeh underlines, “two possible motives stand out: firstly, to jeopardise potential improvements in relations between Iran and the new Biden administration in the United States. And, secondly, to encourage Iran to engage in a retaliatory act”.

Barbara Slavin, director of the Future of Iran Initiative at the Atlantic Council, wrote in the New York Times that the “assassination of Mohsen Fakhrizadeh isn’t about stopping a bomb — it’s about preventing diplomacy”. She maintains that Netanyahu and the Trump administration are pursuing a scorched earth policy to make it almost impossible for the Biden team to come back to the negotiating table.

For analyst David Rigoulet-Roze at the French Institute of International and Strategic Relations, these events are telling of Israel’s and the Arab Gulf States’ worries over the upcoming Biden administration and the stance it will adopt vis-a-vis Iran. The killing comes just a few days after the allegedly secret but not very discreet meeting between Netanyahu, US Secretary of State Mike Pompeo and Saudi Crown Prince Mohammed Bin-Salman at the Red Sea.

The scenario bears a resemblance to the US killing of General Qassem Soleimani on 2 January this year, although there has been no serious Iranian retaliation. As Fitzpatrick points out, whether or not Trump gave Israel the green light for the attack, “he certainly was not unhappy about the assassination.

Karim Sadjadpour, senior fellow at the Carnegie Endowment for International Peace notes that “Iran’s regional/nuclear ambitions don’t end after their [Soleimani and Fakhrizadeh] deaths, but the absence of their leadership and institutional memory will be felt”, adding that Tehran’s reaction is often restrained but drawn out. Revenge is a dish best served cold, and they may choose to exact that revenge over a period of months/years where/when we don’t expect it”.

Furthermore, the killing aimed to put pressure on moderate Iranian President Hassan Rouhani. By immediately retaliating against Israeli or US targets, Iran’s leaders would provoke an escalation in the region that the Trump administration is apparently looking for.

Foreign Policy analysis also points out that the assassination could strengthen Iran’s hardliners who consider negotiating with the West as futile. The hardliner camp was considerably strengthened at the parliamentary election last February, and they are expected to exert pressure on Rouhani ahead of the presidential election scheduled for June 2021.