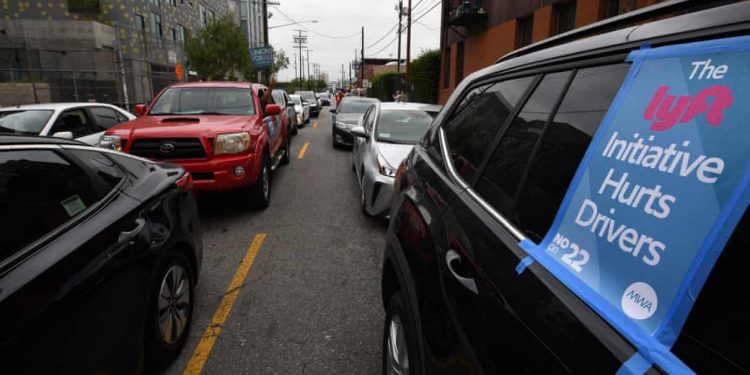 Uber and Lyft drivers are bracing for a shutdown in California, one of the rideshare companies’ largest markets. For drivers it is a bittersweet moment. One that couldn’t come at a worse time and yet holds the promise of a better future.

The coronavirus pandemic has hit so-called gig economy workers hard and ramped up local and state efforts to classify Uber and Lyft drivers as employees rather than contractors, a move that would improve minimum wages and benefits for drivers.

In May California attorney general Xavier Beccera filed a lawsuit over the companies’ classification of drivers as “independent contractors”, noting that due to the coronavirus pandemic “the vulnerability of Uber’s and Lyft’s drivers has become more apparent than ever”.

Uber and Lyft threatened to shut down operations in California over a court ruling on the lawsuit issued on 10 August ordering them to abide by California’s Assembly Bill 5 law (AB5) – which extends employee status to gig workers – and to classify their drivers as employees by 20 August.

A spokesperson for Lyft affirmed in an email that if efforts to extend the stay on the order after 20 August are unsuccessful, Lyft will shut down operations in California.

As the row continues rideshare drivers around the US are struggling to make ends meet, either continuing to work or relying on unemployment benefits from state systems that have struggled to keep up with backlogs and pay out full benefits.

This is a row that involves real money. A report conducted by the UC Berkeley Labor Center in May 2020 found Uber and Lyft would have paid $413m into California’s unemployment benefits system if drivers were classified as employees rather than independent contractors.

California and several states throughout the US are currently struggling to maintain funds for unemployment insurance funds as weekly unemployment claims remain around 1mper week.

Jerome Gage has driven for Lyft in Los Angeles since 2015. When California shut down businesses in response to the Covid-19 pandemic in March, Gage continued driving and saw his earnings drop significantly; the companies have cited ridership declines of around 75% nationally due to the coronavirus pandemic.

“I was making less than $4 an hour with no other option but to keep driving,” said Gage.

Gage had filed for unemployment benefits in March, but has yet to receive any benefits because of issues in the California Employment Development Department obtaining his earning records from Lyft. “The state keeps saying they are waiting on wage information to verify my employment,” added Gage.

In the meantime, Gage has continued driving while paying for personal protective equipment (PPE) out of his own pocket. He said Lyft didn’t begin providing any PPE to drivers until June. Since then, Lyft has been selling PPE to drivers on its website.

Chris Arellano, a Lyft driver and organizer in San Francisco for eight years, waited four months before he started receiving unemployment benefits during the pandemic. He claimed the declining pay for drivers since he started driving in 2012 has fueled organizing efforts to push for drivers to be classified as employees in California and around the US.

“In those early days we were making $30 to $40 an hour, if that was still the case there would be no AB5, no groups like Rideshare Drivers United,” said Arellano. “It took a lot of miscalculations over time and broken promises to get drivers this angry and motivated to join a group like ours. But when you make half of $30 to $40 an hour now and have to pay up for expenses, you create this sort of atmosphere.”

Gig companies have lost several court decisions over the past few months in regards to whether their workers are classified as independent contractors or employees.

Abroad, Uber has faced intense scrutiny over its business models, including halts to operations or bans ordered by national and local governments. In Germany and Spain, Uber uses a franchise model where drivers are classified as employees while still touting flexibility in job advertisements.

Other litigation and proposals have recently been made by elected officials, who cited the coronavirus pandemic as reason for taking action.

The Massachusetts attorney general, Maura Healey, filed a similar lawsuit in July, noting in response to a question on the timing of the lawsuit that the coronavirus pandemic has worsened the needs of rideshare workers.

On 13 August in Seattle, Washington, Mayor Jenny Durkan released a proposal to force Uber and Lyft to pay drivers at least the local minimum wage of $16.36 an hour plus reasonable expenses, effective 1 January 2021. Durkan said:“The pandemic has thrown into sharp relief the consequences of the growing gig work industries.”

Uber and Lyft have opposed these actions and proposals as well, with vast resources being used in response to avoid complying with California’s Assembly Bill 5. The rideshare companies have spent at least $30m each on a campaign in support of voter amendment Proposition 22 to overturn the bill, which California voters will decide on this November.

“Companies like Uber and Lyft have built their empires precisely by bullying regulators, lobbying lawmakers, and deceiving the public, anything to stay one step ahead of accountability,” said Brian Chen, staff attorney with the National Employment Law Project. “Finally, they are being held to account in their home state of California, and they’re turning to the same tricks as usual: threatening to suspend operations and funding a dangerous ballot initiative to buy their way out of their obligations.”

Some Uber and Lyft drivers allege the companies are planning to shut down operations as a tactic to try to manipulate people in California to support Prop 22.

Monro contested the notion Uber and Lyft drivers are independent contractors, citing the lack of control drivers have over per mile reduction pay rates he’s experienced since he began driving in 2014, and Uber and Lyft often charge passengers surge rates when demand for rides is high, without passing on that compensation to drivers.

“They are spending millions of dollars to try to get rid of this law. We pay for the car, all the maintenance, and if anything happens. In 2018 I had a car accident. I didn’t receive any support from Uber and Lyft and I had a passenger in the car,” added Munro.

Tonje Ettesvoll, a driver for Uber and Lyft for four years in San Diego, said it took five months for her unemployment benefits to start after filing in March when her child’s school shut down.

“They are threatening us to scare drivers and make us feel less empowered,” said Ettesvoll. “If you have a business model that can’t accommodate the people who are performing the services of the operation with a fair living wage, you should have another business model.