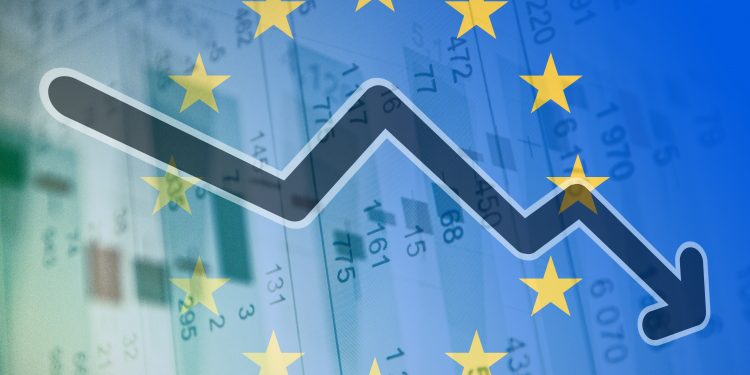 Brussels (Brussels Morning) Business activity in the eurozone dropped sharply in November as countries imposed a new round of restrictions aimed at curbing the spread of coronavirus, according to a survey conducted by IHS Markit, Reuters reported yesterday, Monday.

The new lockdowns have forced many companies from the services sector to close, with the EU economy set for a double-dip recession, the first in almost 10 years.

IHS Markit’s Purchasing Managers’ Index (PMI) dropped from 50 in October to 45.1 in November, the 50 mark being the point separating growth from decline. Chris Williamson, IHS Markit’s chief business economist, attributed the eurozone’s November economic decline specifically to the latest restrictions and cautioned that the data suggests there will be an overall decline of economic activity in the final quarter this year.

The service industry index dropped from 46.9 to 41.3, reaching its lowest level since the peak of the first wave of infections, while the services employment index fell from 48.5 to 48.1 as demand is drying up despite declining prices. However, the manufacturing sector index has remained above 50 in November. It stands at 53.6, which, while down from 54.8 in October, is largely due to the fact that many factories have remained open.

Nonetheless, the index measuring output dropped from 58.4 to 55.5, while the orders index fell from 58.7 to 54, suggesting the negative trend could continue in the coming period. On the other hand, rising optimism about 2021 has been attributed to the possible release of a coronavirus vaccine plus prospects for more aid from the European Central Bank (ECB), with the future output index reaching 60.1, up from 56.5.

Williamson pointed out that companies from the manufacturing and services sectors are increasingly optimistic about 2021, in large part because of growing hopes that the advent of a vaccine will enable a return to normalcy next year.

The latest lockdowns are not as considered to be as harsh as the initial restrictions imposed in the spring, suggesting that the related economic decline will not be as severe, Bloomberg reported Monday. EU member states are providing financial aid to companies and workers, while the ECB announced more measures aimed at helping the economy if needed.

The latest data suggests that Germany is dealing relatively well with the new restrictions, with employment going up and the economy expected to stagnate in the final quarter.