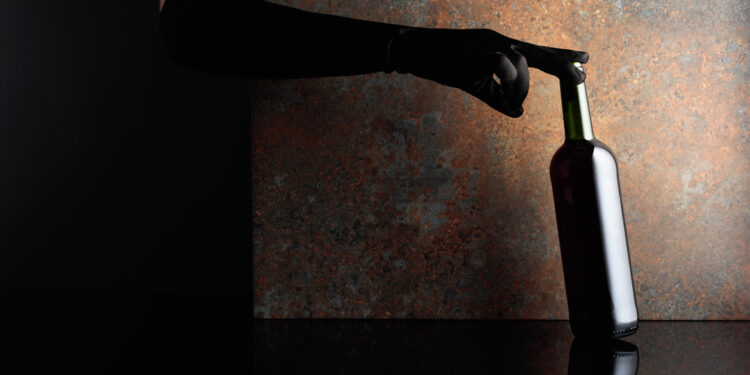 Brussels, (Brussels Morning)- The twenty-something who broke into the Brussels courthouse a month ago, turns out to have ties with the infamous city gang Fioul Gang from Saint-Gilles. During his courthouse raid, he drank champagne in the offices of the prosecutor general while posting videos of his escapades on Snapchat. He threatens to end up in jail for years.

In the night of 17 to 18 May, a suspect was arrested early in the morning in the Brussels court of justice. It concerned a 22-year-old man who had been looting the stately courthouse for several hours. After smashing a front window to gain entry, he smashed several windows and doors inside. Among other things, he entered the offices of the public prosecutor’s office, where he made a bottle of champagne.

After his arrest and questioning at the prosecutor’s office, he was immediately transferred to prison as reported by BRUZZ.  Not because he had been placed under an arrest warrant by the investigating judge, but because he had previously served prison terms.

That the man, despite his young age, is no stranger to the court, was shown on Thursday at the hearing of the criminal court, where he had to answer for the burglary through fast-track proceedings. The twenty-something has been piling up the convictions since he was of age and was also a regular customer at the juvenile court in the years before.

In January of this year, he was sentenced by the Brussels court of appeal to 4 years in prison for his involvement in the case of the prostitution of a 16-year-old girl by members of the infamous city gang Fioul Gang from Saint-Gilles.

Not only does the man still have to serve that prison sentence, but because of the burglary in the courthouse, he also threatens to have to undergo his previous sentences, which in some cases were linked to a postponement. In addition, the public prosecutor is seeking an effective 2-year prison sentence for his stunt in the courthouse, of which he posted videos on social media.

“I had been drinking vodka and was looking for money, food and drink,” he said at the court hearing on Thursday. “I’m a regular on Snapchat, which is why I’ve posted photos and videos online.”

The Buildings Agency, the manager of the Brussels court of justice, is taking a civil party to the proceedings and is demanding compensation of EUR 5,200 for the repair of the destroyed windows and doors. The verdict is on June 24.