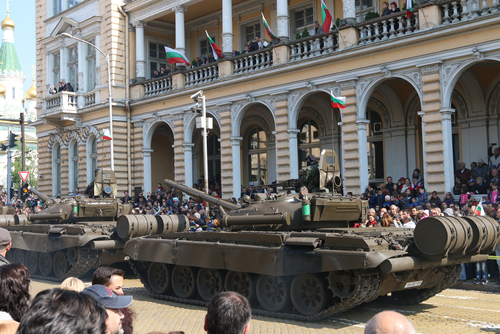 Sofia, Bulgaria - May 06: Day of Valor. Armored vehicles tracked tanks T72 on military hardware parade. Back view. On May 06, 2016 in Sofia Bulgaria.

Belgium, (Brussels Morning Newspaper) The ruling coalition in Bulgaria has agreed on military aid to Ukraine, an issue that nearly toppled the government.

The coalition is split on Moscow, with the Bulgarian Socialist Party (BSP) traditionally supportive, according to DW reporting on Tuesday.

When the war in Ukraine broke out, the BSP threatened to leave the ruling coalition if the country decided to send arms to Ukraine.

Bulgarian President Rumen Radev sided with the BSP on this issue, warning that sending weapons would involve Bulgaria in the war.

In a letter to the Bulgarian Parliament, Ukrainian President Volodymyr Zelenskyy proposed a compromise – no weapons deliveries but repairs and maintenance of equipment and weapons.

Bulgarian deputies reached an agreement last week and adopted this model of military aid, but it is not clear which equipment and weapons will be repaired in Bulgaria.

Gustav Gressel of the European Council on Foreign Relations think tank pointed out that this form of military aid “can really only involve the maintenance and repair of armoured combat vehicles.”

“I very much doubt it will involve anything that flies… transiting that to Bulgaria then returning it to Ukraine involves more effort than it’s worth,” he stressed.

Yordan Bozhilov, Deputy Defence Minister of Bulgaria, recently announced that Ukrainian specialists will visit Bulgaria soon to discuss the types of weapons and equipment that could be repaired.

Potential problems with the plan

On the other hand, former head of Bulgarian arms dealer Kintex, Alexander Mikhailov stressed that the companies responsible for such repairs are in terrible state.

He pointed out that the companies in question depend on Russian technology for repairs of armoured vehicles and Soviet-era aircraft.

“Thanks to underfunding, a third of their equipment is defective,” Mikhailov warned and added “other parts have disappeared, been stolen, or exported… these companies are working at about 40% of their capacity and they’ve been forced to maintain the Bulgarian army’s equipment with that.”

Mikhailov pointed out that Bulgaria is selling weapons to Ukraine via Poland, Slovakia and the Czech Republic.

Former Defence Minister of Bulgaria Angel Naydenov noted in an interview on Saturday that “this is how Bulgaria will continue to sell weapons to Ukraine.”