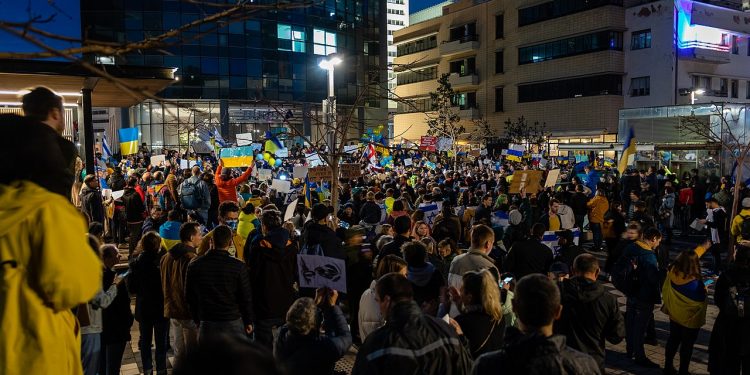 BRUSSELS (Brussels Morning) – The influx of refugees from Ukraine is causing an unprecedented wave of solidarity among Brussels citizens, who are already making thousands of reception places available. At the Civic Platform for Refugees, among others, this gives rise to mixed feelings.

Citizens throughout Belgium are hospitable to refugees from Ukraine. State Secretary for Asylum and Migration Sammy Mahdi (CD&V) already talked about 22,000 places on Sunday, largely with private individuals.

The response is also great in Brussels. On Monday morning Fedasil was aware of a thousand places offered to families in the region. These offers mainly come in through the municipalities. A phone call to some of those municipalities shows that the figure is rapidly increasing. On Monday morning, Brussels-City already counted 179 families who offered one or more places, and in Schaerbeek another 170. In Schaerbeek there is an average of two places per family, according to the cabinet of aldermen of Population Quentin van den Hove (Open VLD).

The Citizens’ Platform for Refugees, which has been active in Brussels since the migration crisis of 2015 and since then also organises reception for citizens, is aware of more than 400 offers in the region for Ukrainians and these figures continue to grow. “About 70 percent of those providers have never offered shelter for refugees,” said spokesman Mehdi Kassou.

Supply seems to be outstripping demand for the time being. Until this weekend, 700 Ukrainians applied for temporary protection status. But that figure is also on the rise. Hundreds – according to some, more than a thousand – Ukrainians lined up at the application centre on the Kleine Ring, near the Hallepoort, on Monday .

Vzw Orbit, specialised in migration and diversity, is arguing in favour of a decentralised approach in response to the influx, which should ensure less overload.

The Refugee Platform is pleased with the sudden wave of solidarity with Ukrainian refugees, both from citizens and from the government. “This is unprecedented, the government has clearly thrown a number of bolts overboard, including when it comes to reception by citizens.”

At the same time, the selective openness of the Belgian government to Kassou feels unjust. It is a feeling he shares with many people who have been concerned about migrants and refugees for a long time. “Since 2015, we have been helping people who often come from war zones. People smugglers have to pay them while we now bring the Ukrainians here with free trains – rightly so. Those people who often come from outside Europe have to watch out for police actions here, they have too little shelter. The contrast is great, it’s really two measures and two weights.”

State Secretary Sammy Mahdi already announced on Monday that Belgium also receives war victims from countries such as Afghanistan or Syria. Mahdi also said earlier that for him there is a big difference between refugees from a European country nearby and people fleeing a distant conflict.

In the meantime, Kassou hopes that the new host families can also be warmed up to non-Ukrainian migrants. “We are there for all people on the run, of course we will also inform our new volunteers about the needs of other groups. Hopefully this crisis will lead to more openness towards refugees, throughout Europe for that matter.”

The platform also hopes that the federal government will take strong control of the coordination of the refugee crisis . “This is not the same as offering people a free Airbnb. Numerous administrative matters have to be arranged for those people, some will need psychological and medical support, children have to find a school. You cannot leave everything to the host families or the refugees themselves.”

A similar sound can be heard in the municipality of Schaerbeek. “We are waiting for more federal clarity about the organisation of the reception. Who will dispatch refugees across the municipalities and how? Who communicates about this and how? We don’t know that now.”