Brussels: Another protest against war in Ukraine 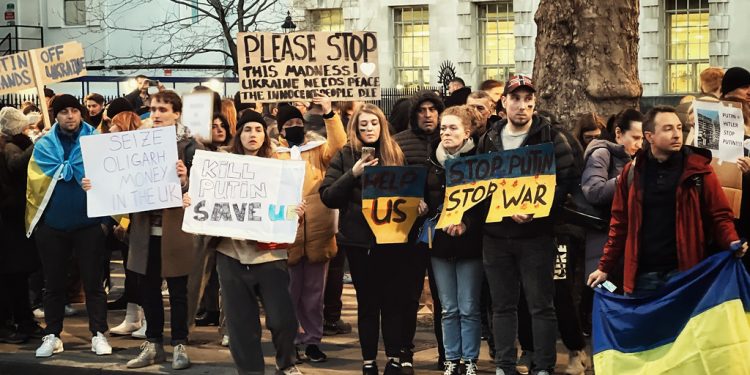 BRUSSELS (Brussels Morning) – New solidarity actions for the war in Ukraine are underway this Saturday on both Albertinaplein and Regentlaan. On Sunday, the organisers of the ‘Stand with Ukraine’ support march are hoping for another 20,000 demonstrators in Brussels.

According to the Brussels-Capital-Ixelles police zone, about fifty people gathered at Albertinaplein on the Mont des Arts around 11 a.m. on Saturday morning. It was an action of ‘Together 4 Freedom’, a movement of protesters from different communities. In addition to a large Ukrainian flag, the demonstrators also carried flags from Taiwan, Turkey, Iran, Venezuela and Cuba. They carried placards stating their communities’ solidarity with the Ukrainians. The action was set up by an Iranian citizen from Brussels.

Since half past two a new protest had been underway on Regentlaan along the inner ring road, opposite the building of the permanent representation of Russia to the EU. According to the local police zone, about 200 people were there. The action ‘We Stand with Ukraine’ was organised by Russians in Belgium.

Sunday, the Promote Ukraine association is organising a large support march through Brussels, which will start at 13.00 on the Koning Albert II-laan. Ukraine is still asking NATO to screen off Ukrainian airspace. “We understand that NATO cannot act directly, but we would like countries like France or Turkey to act at their level and close Ukrainian airspace themselves, at least above nuclear power plants,” said Marta Barandiy, one of the founders of Promote Ukraine.

The organisation hopes to gather up to 20,000 people for the ‘Stand with Ukraine’ march on Sunday. The march will march through the streets of Brussels on Sunday 6 March.

The participants will gather at the intersection of Albert II-laan and Antwerpselaan from 1 p.m. Around 2 p.m., the route goes via the Botanical Garden in the direction of Bisschoffsheimlaan, Madou, Kunstlaan, Rue Joseph II and Etterbeeksesteenweg to end at Place Jean Rey.