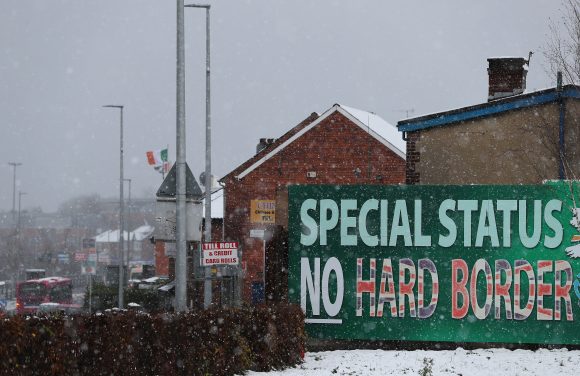 The need to protect peace in Northern Ireland has been the main sticking point in reaching mutually agreed terms with the EU binding its future partnership.

Northern Ireland, as part of the UK, left the EU earlier in the year and its current access to the single market and customs union will end on 31 December alongside England, Wales and Scotland.

The Republic of Ireland remains an EU member but with the 1998 peace deal making a hard border on the island a red line, the Withdrawal Treaty included a protocol to safeguard against such a reality occurring.

It was decided that Northern Ireland would be part of the UK’s customs territory, but it would align with EU customs rules and regulations, creating an Irish sea border instead of a land-based checkpoint.

Without the necessary infrastructure to make that work, however, trade groups say companies could pull back from the province.

“There are high levels of concern about Northern Ireland – Great Britain trade because of issues with systems, infrastructure and information delivery”, said Elizabeth de Jong, policy head at Logistics UK.

“If you’re in the post and parcel sector, there can be 5,000 consignments in your truck and each consignment needs a safety and security declaration and each one has 36 data entry fields.”

Steve Bartlett, who heads the Association of Freight Software Suppliers, also said it was doubtful the necessary software would be ready by 2021, and he was not aware of a contingency plan.

Reuters says retailers that do their deliveries under-the-wire like Sainsbury’s will forego the region to avoid storage unless the government provides more clarity.

Britain and the EU are still in negotiations over a free trade deal that will encompass rules for Northern Ireland trade.

The deadline for ascertaining whether a deal can take place is likely to be 19 November at the next EU summit.