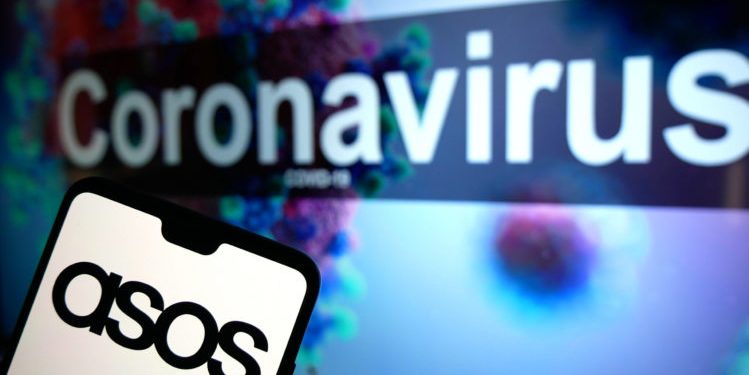 The ASOS logo seen displayed on a mobile phone with an illustrative model of the Coronavirus displayed on a monitor in the background. Photo credit should read: James Warwick/EMPICS Entertainment

London (Brussels Morning) The online fashion retailer ASOS reported quadruple revenues during 2019-20 amid a pandemic that has been catastrophic for many retail businesses.

Buoyed by a cost-cutting strategy and fewer returns as more consumers were buying loungewear and face products, its pre-tax profits were up 329 percent at £142.1 million.

It also gained three million more customers over the past year, bringing its global customer base to 23.4 million, seven million of which are in the UK, where it makes most of its profits.

Global sales are up 19 percent. However, its share dropped 10 percent amid a dismal unemployment forecast anticipated to impact the company.

“Unemployment is going to be a problem, we feel, for our customers” said ASOS Chief Executive Nick Beighton to Reuters, “The brunt of it will fall in the 20-something audience”.

Brexit was also likely to impact the retailer, and Beighton is conscious a no-deal scenario would hurt profits due to tariffs absorbing much of its operating cost.

In the immediate future, the retailer was going into a “very promotional” trading period with Halloween, and then Christmas.

But increased coronavirus restrictions, an extension of the current situation, or tighter measures will dampen shopping behaviour.

“With venues forced to close at 10:00 pm and the Christmas party season cancelled, profits from party wear will be thin”, said Susannah Streeter from Hargreaves Lansdown.

Streeter added the waning job prospects for those in their 20s should influence the type of outfits and pricing ASOS adopts for its future strategy.

“After a record first half which saw us make progress in addressing the performance issues of the previous financial year, the second half will always be defined by our response to Covid-19”, Beighton added.

Unemployment figures for August, released this week, had reached the highest rates seen in three years at 4.5 percent. More job losses are expected as the government-funded job retention scheme ends at the end of the month.