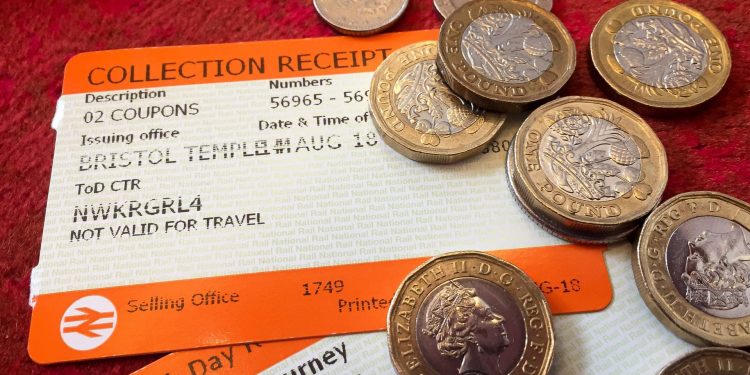 Rail fares are set to rise by another 1.6% in January, adding about £100 to the cost of many annual season tickets after an unexpected jump in inflation last month.

The passenger watchdog, campaigners and unions have all called on the UK government to abolish the policy of annual fare rises at a time when passenger numbers on the railway have plummeted because of the coronavirus.

The fare rise is set by the July retail prices index (RPI) measure of inflation, announced by the Office for National Statistics on Wednesday morning. It will apply to all regulated fares in England and Wales, and most in Scotland. It includes season tickets, anytime urban tickets and most off-peak long-distance returns.

The increase means fares will once again rise well above the more commonly used measure of inflation, the consumer price index (CPI), which is typically lower than the RPI. Fare rises have also outstripped wage rises for most of the past decade, at a time when fuel duty for motorists has been frozen.

The Department for Transport said it was considering the January fares package, including possibly offering new flexible tickets. The rail minister, Chris Heaton-Harris, said: “We expect any rail fare rise to be the lowest in four years come January and any increase will go straight to ensuring crucial investment in our railways.”

Any decision to freeze fares instead would have to be taken by the Treasury. The government spent an additional £2.3bn on rail in the first three months of the Covid-19 lockdown, when emergency contracts were brought in to replace franchises, and is still considering how to proceed when they expire in September.

However, fares across London transport services will now rise 2.6%, under the terms of the funding agreement between City Hall and the government after Covid-19. Caroline Pidgeon, a Liberal Democrat London assembly member, said: “This exceptionally high fare rise makes it clear that Londoners continue to pay the price for the political games being played by the mayor and the government.”

The CPI measure of inflation rose to 1% in July from 0.6% in June, confounding expectations among City economists for it to stay at the same level.

The rate was higher than expected as the global oil price jumped and retailers held back from launching their usual summer sales, despite Britain’s economy struggling for momentum as the country grapples with the deepest recession since records began.

The ONS recorded the largest monthly increase in petrol prices for almost a decade and a lack of summer sales on the high street after the reopening of non-essential shops pushed up the rate of inflation.

Clothing prices did not fall by as much as usual for the time of year, with the reopening of high street stores after lockdown having a knock-on impact on shopping patterns. Retailers normally slash prices in July summer sales before the arrival of autumn product ranges. However, clothing and footwear prices fell by just 0.7% between June and July, compared with a fall of 2.9% between the same months in 2019.

The RMT union said that rather than increase rail fares, they could be cut by 5% by diverting funds paid to private operators during the coronavirus crisis. The government has suspended franchises and underwritten losses on the railway, where passenger numbers are still less than a quarter of pre-coronavirus levels.

The passenger watchdog, Transport Focus, has called for cut-price deals to incentivise travellers to return to the railways and joined the RMT and others in calling for new season tickets for part-time commuters to reflect new working patterns and make rail travel more affordable.

Campaigners said Wednesday’s inflation announcement was a “missed opportunity” to tempt people back on trains. Darren Shirley, the chief executive of Campaign for Better Transport, said the fare rise “will do nothing to restore people’s faith in the railways.”

Labour said fares had risen 42% in real terms since 2010 and called for full re-nationalisation of the network.

The Rail Delivery Group, an industry body, said fare levels were a decision for government but it hoped to see the ticketing system reformed. A spokesman said: “The best way to support economic recovery now and keep fares down in the future is to get more people travelling by train.”

Despite the increase of inflation in July as the economy reopened, analysts expect the inflation rate to decline in August as the government’s VAT cut for the hospitality sector and the eat out to help out restaurant discount scheme drags down the cost of living.

Ian Stewart, the chief economist at the accountancy firm Deloitte, said: “Covid-19 has delivered a major deflationary shock to the economy. The inflation rate has dropped sharply since the start of year. A recovery is under way but the economy is operating with huge amounts of spare capacity that could push inflation into negative territory.”