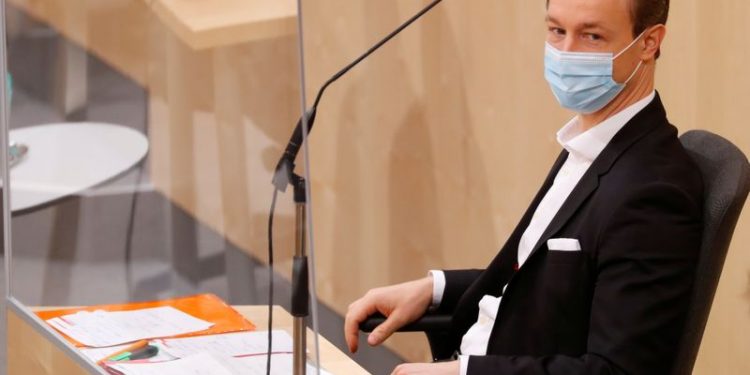 FILE PHOTO: Austrian Finance Minister Gernot Bluemel wearing a protective face mask waits for the start of a session of the Parliament, during the coronavirus disease (COVID-19) outbreak, in Vienna, Austria May 26, 2020. REUTERS/Leonhard Foeger

Britain has to decide whether to take Brexit negotiations seriously, the Austrian Finance Minister Gernot Blümel said Friday prior to an EU finance ministers’ meeting in Berlin, Reuters  reports.

Blümel said it was vital that the UK make up its mind on the issue after London proposed amendments that appear to discard parts of the earlier withdrawal agreement. He said the latest stand-off in negotiations on the UK’s future relationship with the EU is similar to the deadlock two years ago, when the two parties were unable to reach an agreement on the terms of UK’s departure from the union.

Ireland’s Finance Minister and Eurogroup President Paschal Donohoe warned on Friday that the UK must respect its commitments in the withdrawal agreement it signed with the EU if it wants to have a trade relations deal with the bloc. Donohoe stressed that honouring agreements already in place is a prerequisite for forming future trade relations between the UK and the EU. It was imperative that the UK Government respond to the European Commission’s call, he added.

Earlier this week, Britain announced plans that would violate international law by contravening parts of the withdrawal agreement it signed in January, thus causing a crisis in EU-UK Brexit negotiations just four months before the end of the transition period.

Conducting talks on the coming trade deal on behalf of 27 EU member states, the European Commission called on Britain on Thursday to remove sections of the newly proposed regulations that would contravene the treaty with the EU and to do so by the end of the month. Reuters reports that the UK drafted the bill in order to override clauses in the withdrawal treaty requiring the UK not to subsidise companies exporting to the EU, since subsidies would mean they had an unfair competitive advantage.

Insisting that the UK had to respect what it already had agreed to, German Finance Minister and Vice Chancellor Olaf Scholz said the EU will remain open to striking a deal with the UK right up until the last moment.

French Finance Minister Burno Le Maire cautioned that France will not accept anything that might jeopardize or weaken the EU market, Reuters writes.