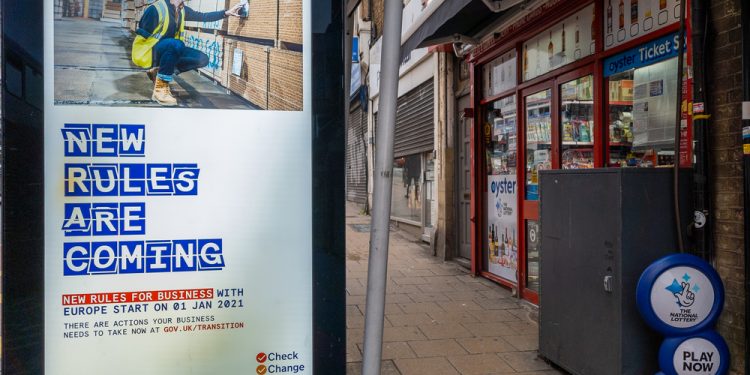 London. UK a billboard advertisement by the government informing businesses trading with the EU to act before the end of the Brexit transition period.

London (Brussels Morning) As the official Brexit date looms closer, businesses are stockpiling on goods to avoid uncertainty in January, driving up prices and diminishing capacity, according to a report by Reuters.

Customs agents have also reported being inundated with queries on what to do as the new regulations come into view.

“We have told our customers that the best thing you can do now is stock up, stockpile, and they’re bringing in as much as they can”, said the director of logistics company Jordon Freight, Jon Swallow.

“The consequence of that is there’s simply not enough capacity and the prices are going through the roof”, he added.

Swallow said prices had risen 20 percent over the last few weeks, with a further increase expected in December. Another freight processional Tony Shally said the cost of journeys between England and Northern France had increased by more than 10 percent.

Stockpiling had commenced as earlier Brexit deadlines were announced, but the pandemic had impaired the cash flow necessary to continue.

The added requirement has received 84 million pounds in funding from the government, but many companies have been reluctant to increase manpower before gaining clarity on the new system.

While there are only five weeks to go before the end of the transition period, a deal is still possible, say those involved in negotiations, but both sides have iterated the terms have to be right.

“We absolutely should not be stretching for a deal at any cost, that is not the right thing to do”, said finance minister Rishi Sunak.

EU officials say a deal is not likely before next week. The EU’s chief negotiator on Brexit, Michel Barnier, is due to update envoys on the status of trade talks in Brussels on Friday.