Brexit: No deal looms large as EU and UK insist other side must blink to save talks 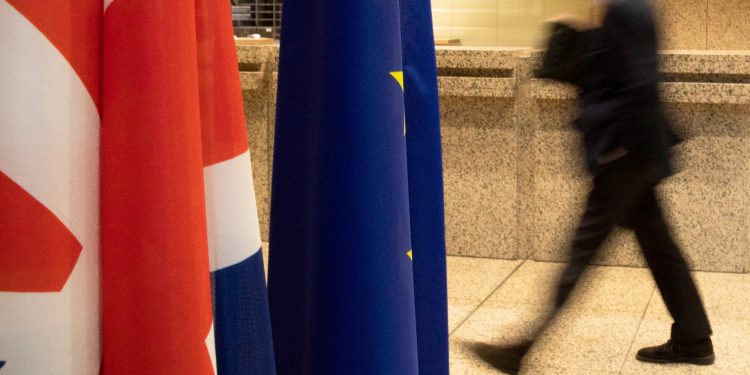 A no-deal Brexit looms larger than ever after both the EU and UK said an agreement is “unlikely” and vowed not to blink in the few months left for talks.

The latest round of negotiations broke up in now-familiar acrimony, forcing Boris Johnson to admit to missing his deadline for a breakthrough by the end of July.

In a blistering attack, Michel Barnier, the EU chief negotiator, warned attempts to bludgeon Brussels with “ultimatums or threats” would fail, adding: “I don’t think we’ve got time for these games.”

He told a press conference: “By its current refusal to commit to the condition of open and fair competition, and to a balanced agreement on fisheries, the UK makes a trade agreement at this point unlikely.”

A senior UK government source later agreed that was an accurate description of the stalemate, but insisted a deal would only be struck if the EU gave up on its red lines.

“The question is can they adapt their position to recognise that they are negotiating with an independent state?” the source said.

It emphasised how – despite both sides saying a deal is still possible in September – the fundamental differences between them have not been bridged.

Without a deal, the UK will crash out of the transition period, at the end of December, into chaos for traders, travellers and security co-operation – threatening a fresh economic slump.

Mr Barnier pointed to “no progress” in two key areas, the first being the UK’s refusal to guarantee “level playing field” rules for workers and the environment and set out its state aid demands.

Secondly, on fishing rights, he branded the UK’s position “simply unacceptable”, saying: “The UK is effectively seeking for near-total exclusion of fishing vessels from the UK’s water.”

Insisting the EU was engaging, he claimed: “The UK has not shown the same level of engagement and readiness to find solutions respecting the EU fundamental principles and interests.”

But the UK source vowed there would be no concessions in either area, saying, on state aid: “We are not going to pre-commit to a particular regime, that’s just not how we are going to do things.”

On fish, the source added: “We will have right to patrol the economic exploitation of our fishing grounds and we will set the terms on which that is done.”

While that did not “require exclusion”, the EU had to agree to UK “control”. The source said: “Until they do, it is going to be difficult to get a fisheries agreement.”

The EU has pencilled in a summit on 15-16 October as a possible deadline, given the need to draft and agree a long legal text which must also be ratified by the European parliament.

Notably, Mr Barnier said the EU was armed with a €5bn contingency fund for a no deal, implying it would be the UK that would suffer more.

Nevertheless, there was some progress on a third stumbling block – on the future role of the European Court of Justice in settling disputes – where the EU appeared to have given ground.

Mr Barnier is in London again next week, after which both sides will take a short holiday and prepare for the next formal round of negotiations from 17 August.