Brexit lift-off: UK could forge £20trillion trading bloc with US to ‘eclipse EU’ 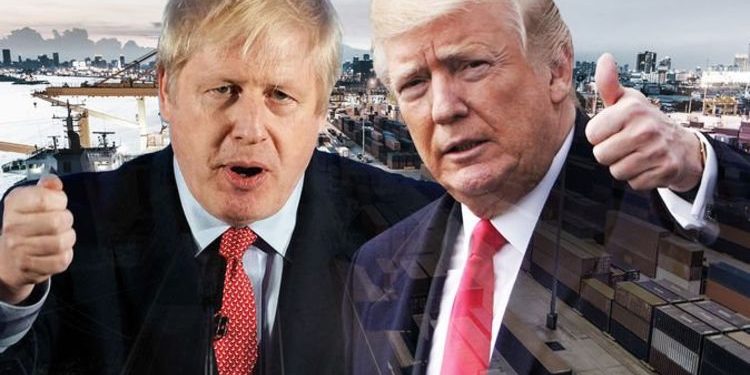 THE UK will forge a post-Brexit ‘Anglophone alliance’ with the United States worth an eye-watering £20 trillion, an expert has claimed, packing significantly more financial firepower than the European Union can muster.

Ray Bassett, who has just published his new book, Ireland and the EU Post Brexit, believes Dublin must follow London’s example by severing ties with Brussels in order to become part of the new trading bloc, which he envisages would also include Canada. Mr Bassett, himself a former Irish ambassador to Canada, as well as Jamaica and the Bahamas, fears without a so-called Irexit, Ireland will end up a peripheral, isolated player on the edge of the continent.

In his book, he writes: “Despite the short-term quixotic behaviour of the Trump administration, there is every possibility of the emergence of an Anglophone North Atlantic free trade area, encompassing the USA, Canada and Britain.

“This would form part of an alternative trade strategy for the UK, post Brexit.”

Mr Bassett stressed the “strong sense of kinship” between the three countries in question.

He added: “The aim of these arrangements, with Canada and the United States, would be the creation of an Anglophone North Atlantic Free Trade and Investment Area, involving both North American countries and the UK.”

According to data carried on the International Monetary Fund’s website, the combined GDP of the three nations as of 2020 totals just over £20.5trillion more than £19trillon ($25trillion) – more than £5trillion more than the EU’s total, which is slightly less than £15trillion.

The UK would bring with it a GDP of almost $3trillion, Mr Bassett said.

Mr Bassett said: “During his visit to the UK in June 2019, President Trump was enthusiastic about a bilateral deal with the UK,starting that the US is committed to a “phenomenal trade deal” with the UK as soon as it leaves the EU.

Ireland was heavily reliant on American investment and “easy trade arrangements” between the EU and the USA, Mr Bassett said.

Therefore anything which threatened the relationship – such as the UK being given preferential treatment in a post-Brexit environment – represented a “major risk to Ireland”, he explained.

He warned: “While US relations with the UK are likely to warm considerably in the next few years, the same cannot be said for EU-US relations, which have been under strain since President Trump was elected in the USA in 2016.

“Ireland has a huge interest in maintaining harmonious relations between Brussels and Washington.

“However, it is doubtful if Ireland’s interest will be a major consideration for the EU Commission and its relations with Washington.

“It will be primarily concerned with bigger ticket items, like German car exports and that country’s investment in the USA.”

Moreover, Mr Bassett also fears Ireland may find an EU shorn of the UK to be an increasingly inhospitable environment.

He said: “In recent years and particularly so since the admission of post-communist European States, the English language has become dominant within the EU, paradoxically the lingua franca.

“However, in a post-Brexit EU with only five million native English speakers in the Republic of Ireland, the English language will no longer have as strong a case to be the dominant language of the institutions.”

In 2017 former European Commission President Jean-Claude Juncker has crowed that English was “losing importance in the EU”, Mr Bassett pointed out.

He added: “As the effects of Breixt finally take shape, Ireland will find itself on the extreme western fringe of the European Union.”