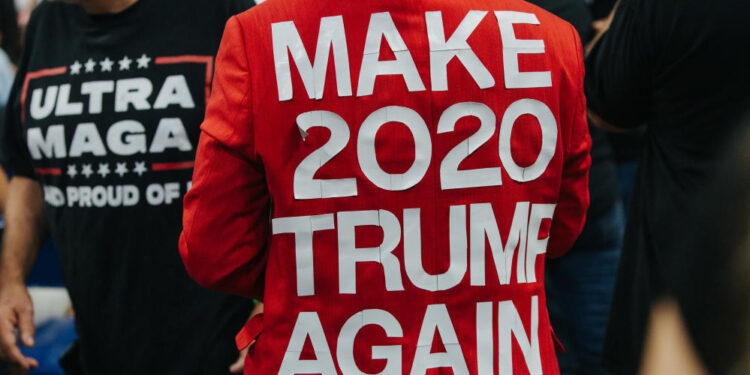 The USA, (Brussels Morning Newspaper) Any rational Republican looking at the midterm election would conclude that continued dominance by the extreme MAGA faction is bad for the party. When all the votes are counted it is likely that the Republicans will have a majority in the House of Representatives and possibly a majority in the Senate as well.

However, at best they will flip a total of about fifteen seats in the House and two in the Senate. That is not exactly the red wave that Kevin McCarthy promised, and that the media suggested was all but inevitable.

It is very difficult to look at the GOP’s underwhelming performance and place some of the blame, his own protestations notwithstanding, at the feet of Donald Trump. One reason for this is that it looks like Senate candidates with strong backing from Trump in Pennsylvania, Arizona, New Hampshire and possibly even Georgia and Nevada will lose races that were winnable for the GOP.

A good case can be made that Trump may cost the Republican Party control of the senate. Similarly, Republican candidates for governor who put election denial at the center of their campaign lost very winnable races in Pennsylvania and probably Arizona as well.

The obvious questions this raise are what will the Republican do about this and will they finally move beyond Trump. The answer to the first question is probably nothing; and to the second question an almost certain no. One reason for this is that there is no mechanism for the Republicans Party to do anything with regards to these questions. There is no powerful central body that can draft cohesive strategy or promote candidates. Additionally, the Republican National Committee (RNC) and many state Republican parties remain dominated by Trump loyalists.

There is thus a very real possibility that contrary to all evidence, and logic, the lesson the GOP will take away from this election is that they were not sufficiently pro-Trump. That sounds absurd, but that is today’s Republican Party. Based on what we have seen in the last few years, we can get a sense of how this will happen.

First, as results are finalized in the next few days, candidates like Kari Lake and Blake Masters, the Republican nominees for Governor and Senator respectively in Arizona, as well as possibly defeated gubernatorial candidate Doug Mastriano in Pennsylvania and several others may claim that the election was fraudulent, thus renewing the big lie narrative that has now become a widely held Republican view.  As in 2020, there is no evidence of this, but it would allow Trump loyalists to blame dastardly election administrators rather than Trump.

The locus of anti-Trump energy in the Republican Party today is Ron DeSantis, the far right Governor of Florida who was reelected easily on Tuesday winning just short of 60% of the vote in a state that had been competitive between the two parties as recently as a few years ago. DeSantis’s victory has solidified his position as the leading non-Trump candidate for the Republican presidential nomination in 2024 while spurring some speculation that he should, and will, run in the primary against Trump.

It is way too early to know who would win that primary, but it would be a tough race for DeSantis. Throughout his time in political life, Trump has shown an extraordinary resilience in large part due to his huge and loyal base. That may change now, but nobody should assume it will just because a few senate candidates lost.

A month from now the media will have moved on from the midterms and people will forget Dr. Oz, Doug Mastriano and Blake Masters. Additionally, the possibility of Trump being indicted cannot be overlooked; and nothing would do more to strengthen his standing in the GOP then that.

It is very likely that once again talk of the GOP breaking with Trump will prove false, but it is almost certain that in the bigger picture it doesn’t matter all that much. DeSantis is smarter and more polished than Trump, but he does not represent a substantive break with Trumpism or the authoritarian movement that has taken over the Republican Party.

Even if he is not the nominee in 2024, the way that Trump has remade the Republican Party and turned into an explicit threat to American democracy will not change. It should be noted that DeSantis got elected governor by presenting himself as the most ardent Trump supporter in the 2018 primary there.

Since becoming governor he has embraced the ugliest aspects of what is broadly known as the culture wars, railed against woke liberals at every opportunity, supported voter suppression and anti-LGBT legislation in Florida and sought to limit freedoms of speech for those who disagree with him. DeSantis may be able to beat Trump, but he would remain committed to Trump’s ugly authoritarian vision.