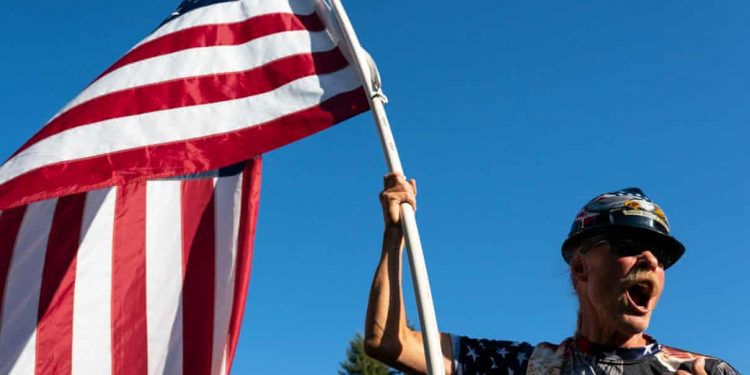 The recent deadly protest in Portland, where a far-right supporter was killed, was just one of many organized in recent weeks with the help of a network of pro-Trump, pro-police and anti-Black Lives Matter activists in a local Facebook-powered pro police network in Oregon.

That network’s ability to draw the support of far-right groups and more mainstream Republicans alike reveals an increasingly energized and militant grassroots Trumpist movement, which includes some members who are prepared to engage in violence, experts say.

The network is comprised of a network of like-minded activists in two overlapping groups, “Back the Blue PDX”, and “COPS NW”. Those activists are planning future events, and given the high tensions following the shooting death of one of its supporters – with the suspected shooter reportedly supportive of local leftwing anti-fascist groups – the prospect of more unrest is high.

That is especially true as the country enters the final stages of the presidential election with Donald Trump running on a law-and-order message, while inflaming racial tensions and offering support to his most extreme supporters, including those who engage in violence.

Working mostly on Facebook, the small group of local activists have helped stage a series of recent events in or near the Portland metro area.

Saturday’s “Trump cruise” saw a large number of participants stray from the highway-only protest route agreed with the Portland police bureau (PPB) and roll into the downtown area for a confrontation with leftwing protesters. There, reporters recorded rightwing protesters discharging pellet guns and mace into the ranks of nearby protesters and media.

Soon after, in a nearby street, a man wearing a cap bearing the insignia of Patriot Prayer, a prominent far-right group, was shot dead.

In an email announcing a memorial event, James Buchal, a lawyer and chair of the Multnomah County Republican Party, identified the dead man as Aaron J Danielson. The Oregonian reported on Monday that a PPB homicide investigation was focused on a BLM and regular attendee of downtown protests in recent weeks.

Danielson’s death was highlighted by Trump who retweeted an account which had incorrectly identified the victim, adding “Rest in Peace Jay”. He also defended the use of paintball guns by his supporters in Portland.

The events in Portland once again drew the attention of the far-right Proud Boys, who are promoting a rally in the city on 26 September. Further truck rallies are now advertised for 7 and 19 September.

Saturday’s event was organized by a man presenting himself as “Alex Kyzyk” on Facebook, but whom social media materials, a business website, and public records reveal to be Alex Kuzmenko, who has owned real estate and development companies near Boise, Idaho, where he organized a previous, similar rally.

Kuzmenko did not respond to multiple requests for comment.

The event was also heavily promoted by local organizers, along with at least 17 events since mid-July, all advertised, like the Trump cruise, on the Back the Blue PDX Facebook page.

Mostly these have been pro-police rallies in Portland’s suburbs and surrounding communities, claiming to offer support to local police in the face of a three-month streak of pro-BLM protests in Portland, which began with the killing of George Floyd by a white Minneapolis police officer.

The main “Back the Blue” organizer is identified on Facebook as Shelby Follett, but he is in fact Portland resident, Shelby Walman, who has been quoted under his real name in previous reporting on protests in the city.

In a telephone conversation, Walman said that the group’s purpose was to “get the word out that not all cops are bad people”, and that he was drawn into organizing following his “disgust” at the way protesters interacted with police.

At several of the events associated with Back the Blue PDX, crowds have come prepared for violence, and some individuals in those crowds, including members of the Proud Boys, have gone on to fight leftists in downtown streets.

One of those is Alan Swinney, a 50-year-old Midland, Texas resident and Proud Boy with a long history of attending and organizing politicized street confrontations around the country. In recent weeks, he has been located in the Portland metro area, and has attended several Back the Blue PDX affiliated rallies.

On 22 August, the week before the shooting incident, Swinney was filmed at a downtown protest firing pellets at protesters and journalists from an airsoft gun, and at one point brandished a revolver at his opponents. One of the protesters who Swinney shot with the projectiles filed suit on Wednesday seeking $250,000 in damages.

Then last Wednesday, Swinney led a rally in Gresham on the metro area’s eastern fringe, which opposed the city’s decision to fly a BLM flag from the city hall. A month earlier, the Multnomah County Republican Party had staged a protest at the same venue protesting the same flag. Threats ahead of the rally, and concerns that protesters would be armed, led the Gresham council to consider removing the flag for the duration of the rally.

Other events organized by Back the Blue PDX, however, have advocated for causes not directly related to the Black Lives Matter protests but that reflect a wider support for Trump, the Republican party and also suggest the influence of the QAnon conspiracy theory movement.

One recent protest, and another planned for this week are themed “Defund the Media” and another, held Monday, was called “Trump RALLY/Oregon Trafficking Awareness”. Video shows a series of speakers addressing the topic of child abduction and child trafficking; a favorite topic of QAnon adherents, many of whom profess a belief in systematic, large-scale child abduction by powerful pedophiles.

Another key organizer in the Back the Blue PDX network and COPS NW, Audra Price, said in a Facebook direct message that the purpose of the group was to “hold peaceful rallies to simply show support/encouragement to officers and their families and we are continually attacked both verbally and physically by those participating in the protest for the past 90+ days”.

Asked what the relationship was between issues like child abduction, alleged media bias, and their opposition to the protests downtown, Price wrote: “We are out there to support police, not oppose anyone or anything.”

The recent violence at events associated with the group has not deterred them from further activities, and they are advertising two more events this weekend. One is a “Blue Lives Matter” rally to be staged in south-west Washington state, and “Back the Blue Scappoose”, to be held in a smaller city an hour from Portland.

While Portland police are investigating Saturday’s death as a homicide, they did not respond to questions about any illegalities in the lead-up to those events.

In a city where police have been dogged by allegations that they are too close to rightwing groups, there is some evidence that the admiration that Back the Blue has for law enforcement is in some part returned.

In a Facebook post obtained by the Guardian, published to the COPS NW private group, a private group associated with the movement, Audra Price shows off what she claims is a letter from the US Marshals Service, thanking the group for the “ongoing donation and delivery of bottled water, energy drinks and energy snacks” and apologizing that “recognition cannot be made in a more public venue, but safety of supporting organizations and individuals is paramount”.