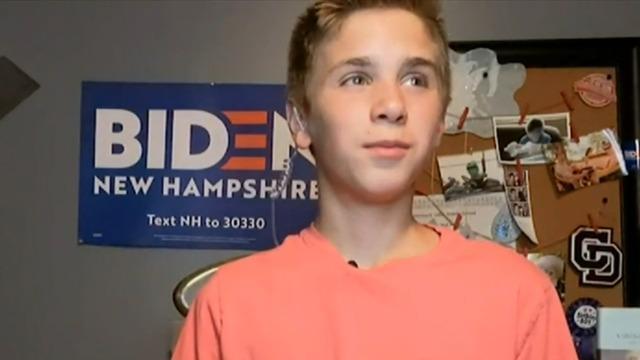 Political events aren’t often the venues for profoundly emotional moments, but during the last night of the Democratic national convention on Thursday, a young boy with a stutter managed to deliver one in two minutes.

Thirteen-year-old Brayden Harrington was invited to speak at the event after he met Joe Biden at a rally in New Hampshire in February.

When Biden, a fellow stutterer, learned about Harrington’s speech difficulties at the rally, he invited him backstage. There, Biden showed him the speech he had just delivered and the annotations he used to signal when to breathe, and gave him advice and exercises for overcoming his stutter.

“He put his focus on Brayden and made time for him, talked to him, explained that it doesn’t define him, he’s stronger, that he’s a good person,” Brayden’s father, Owen, told CNN at the time. “It was really overwhelming for [him]. He started breaking down a little bit.”

Six months later, Harrington was beamed into the homes of millions of Americans and ended up delivering one of the most widely praised speeches of the four-night convention.

It was one of many stories highlighted by the all-virtual Democratic convention this week, which foregrounded a number of speeches by non-politicians such as Kristin Urquiza, whose father died of coronavirus, and the healthcare activist Ady Barkan.

In Harrington’s address, the teenager said that “without Joe Biden I wouldn’t be talking to you today,” and that during their first meeting, Biden had told him they were “members of the same club”.

“It was really amazing to hear that someone like me became vice-president. He told me about a book of poems by Yeats he would read out loud to practice,” he said. “He showed me how he marks his addresses to make them easier to say out loud. So I did the same thing today. And now I’m here talking to you today about the future, about our future.”

The veteran US journalist Dan Rather described Harrington’s speech as “pure, unvarnished courage”, while CNN’s senior Washington correspondent Jeff Zeleny tweeted that he was “just remarkable. What courage and guts it took him to do this. Good luck, Brayden. You will go far.”

Other viewers also found Harrington’s speech an emotional one to watch, and a show-stealer.

Meanwhile, some have contrasted Biden’s treatment of Harrington with Trump’s behavior towards those with disabilities, with Arianna Huffington highlighting the incident in the 2016 election campaign when Trump offensively imitated the reporter Serge Kovaleski, who is disabled.

The official video of Harrington’s speech uploaded by the DNC Twitter account has been viewed more than 2m times, although the real figure across all uploads is likely to be much higher.