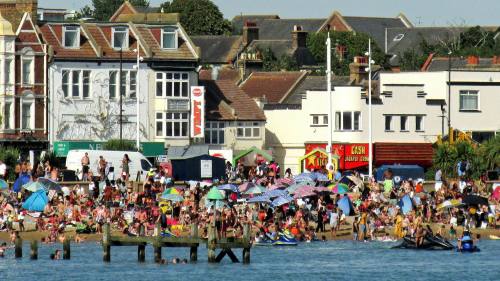 Seaside destinations including Bournemouth, and towns such as Doncaster have been among the biggest beneficiaries of the government’s “eat out to help out” scheme, according to research.

However, the thinktank said the boom in seaside towns, which have been popular destinations for staycation families, had not been replicated in larger cities, including London and Manchester, as office workers continue to work from home or are furloughed.

In London, the number of city centre visitors on eat out to help out nights – Monday, Tuesday and Wednesdays – was just three percentage points higher than the same nights in late July – one of the lowest increases in the UK. Manchester was also among the cities in the bottom 10 to benefit from the scheme.

In a sign of the boom in some locations, the owner of the Real Greek and Franco Manca chains said the scheme was the driver of one of its best ever weeks for sales in the second week of August. However, three of the chains’ central London locations will remain shut until office workers and theatregoers return.

According to the Centre for Cities, Bournemouth recorded the biggest increase in visitor numbers with a 23 percentage point rise, as hot weather drew tourists to the south coast town in early August.

Suggesting the lifting of coronavirus restrictions has had an uneven effect depending a city or town’s size and working patterns, the thinktank said smaller cities such as Dundee and Peterborough, and larger towns such as Doncaster were also among the biggest beneficiaries.

Visitor numbers also increased in places where an uptick in coronavirus infections have led to localised restrictions, but where restaurants and pubs have been allowed to reopen. These included in Leicester, Burnley and Bradford.

Footfall fell, however, in Aberdeen, where the Scottish government has forced businesses to close in response to a local outbreak.

Reflecting the boom in restaurant visits on Monday to Wednesdays since the launch of the eating out scheme, figures compiled by the online booking platform Opentable suggested Britain was outstripping many other advanced economies – including the US, Australia, Canada and Germany – in this regard.

Visits to restaurants at the weekend remain significantly below pre-pandemic levels, in a signal that UK consumers are taking advantage of the discount rather than returning to eating out more broadly.

Andrew Carter, the chief executive of the Centre for Cities, said a question mark remained over whether the footfall increase this summer can be sustained into the autumn after the scheme ends and the weather turns colder.

“Shops, restaurants and pubs face an uncertain future while office workers remain at home. So, in the absence of a big increase in people returning to the office, the government must set out how it will support the people working in city centre retail and hospitality who could well find themselves out of a job by Christmas,” he said.

Tags: Eat out to help out