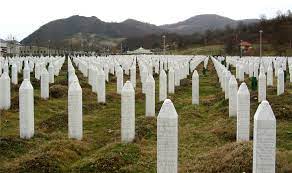 Brussels (Brussels Morning) Ethnic Serb politicians in Bosnia and Herzegovina are threatening to block the functioning of the federal government and the country’s central institutions with a boycott, after the International Representative in the country acted to ban genocide denial.

High Representative for Bosnia and Herzegovina, Valentin Inzko, introduced a new law on Friday, criminalising genocide denial and glorification of war criminals in the country, which was immediately denounced by political leaders of the ethnic Serb entity in BH, the Republic of Srpska.

Inzko, who leaves his post on 1 August after 12 years in Bosnia, argued that the new regulation was necessary, given that Bosnian Serb politicians often publicly downplay or flatly deny the 1995 Srebrenica genocide. The two Serb leaders behind the genocide, politician Radovan Karadžić and General Ratko Mladić, are often hailed as heroes in the Republic of Srpska, despite The Hague Tribunal having sentenced them to life imprisonment for genocide.

Following a meeting of Bosnian Serb politicians on Monday, a decision to boycott the Bosnian tripartite presidency, parliament and government was reportedly reached. This would effectively block all of the country’s federal institutions since the 1995 Dayton peace agreement mandates that all three ethnicities – Serbian, Croatian and Bosniak – must be represented in the nation’s central institutions.

An opposition politician from the Republic of Srpska, Branislav Borenović, announced on Monday that Serb politicians had decided not to participate in the work of the federal institutions until “this issue is resolved”.

Republic of Srpska leader, the Moscow-backed politician Milorad Dodik, threatened over the weekend to initiate the secession of his entity from BH, while insulting Inzko and claiming he was bribed to institute the controversial regulation. The Office of the High Representative, established by the Dayton accords, has sweeping powers as protector of the peace treaty, including the right to unilaterally introduce binding decisions, repealing laws and removing officials from power.