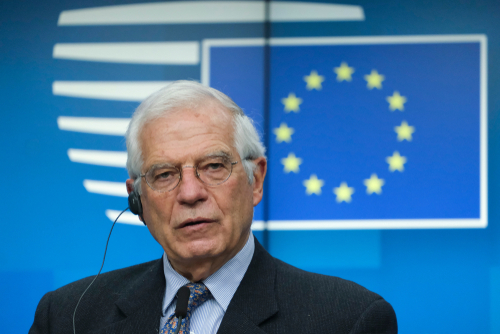 Borrell did convey the EU’s condemnation of the jailing of opposition figure Alexei Navalny on his return to Moscow. However, Borrell was seen to have let his Russian counterparts off the hook when he revealed that further sanctions are not currently on the agenda. This, he indicated, was the case because no member state has requested that the issue be discussed when EU foreign ministers next meet on 22 February.

”We have for sure been talking about the case of Navalny and I have expressed our deep concern and reiterated our appeal for Navalny’s release and allowing an impartial investigation into his poisoning,” Borrell said when prompted by journalists at the press conference. ”A fully transparent investigation would help to clarify what happened with Navalny’s poisoning.”

Russia’s Foreign Minister Lavrov rejected any findings of a nerve agent related to Navalny’s poisoning, saying this was a claim established solely by German doctors.

On the sactions issue, Borrell simply stated: ”There is no proposal for the time being by any EU member state. Discussions will continue at the next foreign ministers’ meeting and we will have an important discussion on Russia at the March EU leaders’ meeting..”

The timing of Borrell’s sudden working visit to Russia was made more questionable in light of Navalny’s court appearance. Yet, despite the political differences, the High Representative was intent on strengthening cooperation with Russia, especially with regard to tackling climate change and promoting the EU’s green deal.

”This should be done despite our disagreement on this very important issue,” Borrell said with reference to Navalny.

Back in Brussels, EEAS spokesperson Nabila Massrali clarified that Borrell is in contact with Navalny’s team and will hold meetings with civil society and liberal academia in Moscow.

”We did not request a meeting with Navalny in prison as that would be a way of expressing acceptance of the situation,” Massrali said. ”As it is unacceptable that Navalny is behind bars, it would give wrong signal.”

in March will focus the interest of the EU on more constructive contacts. We are ready for it,” Lavrov said in  a comment that went unanswered by Borrell.

Lavrov regretted how the EU has made the lifting of sanctions against Russia’s implementation of the Minsk agreement on ceasefire and restoring peace in Eastern Ukraine one of its conditions for progress.

”They want to preserve the sanctions, all of these artificial conditions that were added under Federica Mogherini’s time,” the Russian Foreign Minister said, referring to the sanctions that were reinforced under the former EU Foreign Policy Representative.

”We insist on non-interference in each others’ domestic affairs, as well as ensuring access to information and equitable dialogue and mutual respect,” Lavrov declared. ”Dialogue is not for seeking opportunistic goals.”

High Representative Borrell made no mention of Ukraine or Russia’s annexation of the Crimean peninsula in hs remarks but urged respect for territorial integrity.

”There must be respect for human rights and fundamental freedoms. We need to build mutual trust, that is the purpose of my visit,” Borrell stated.

He hoped that external borders would open as quickly as possibly and that trade relations would normalise, despite political relations being at a low.

Intent on relaunching a dialogue with Russia and signalling cooperation on reviving the Iran nuclear deal, the High Representative aligned with Russia in condemning the US sanctions on Cuba adopted in the last days of the Trump administration.

”We regret very much the designation by Trump to include Cuba on the list of countries supporting terrorism,” Borrell said. ”We expect that the new US administration will backtrack on this decision which creates a lot of difficulties for the Cuban people and for the trade and economic relations between the EU and Cuba.”

Borrell’s efforts to restore EU relations with Russia were not entirely appreciated in the European Parliament. MEPs suggested he was doing little more than going through the motions whereas they wanted a clearer policy on supporting Russian democracy activists.

Polish MEP Anna Fotyga with the Conservatives ECR reiterated general concerns about the state of Russia’s democracy. She said she was taken aback by Borrell’s remarks that no further sanctions had been tabled against Russia.

”But what about Nordstream 2? In many statements we have said we want to stop that project, that should be taken into account,” she recalled, citing the Polish stance on the controversial gas pipeline

”The case of Navalny is a snapshot of what happens in the Russian political field now,” Finnish MEP Heidi Hautala from the Greens stated. ”The message we get is that resistance is stronger than ever politically,” she said. ”There may be changes in the coming months and years, but with Putin having the elections in 2024 in mind, we have to find ways ahead.”

French MEP Raphael Glucksmann from the Liberals was also critical of Borrell’s Moscow performance, saying that issuing mere statements raised questions about the EU’s clout in international relations. ”It is time to take action. These sanctions are still only a piece of paper and now no restrictive measures would be on the agenda! We send a message to this regime that all our acts are nonsense,” Glucksmann exclaimed.