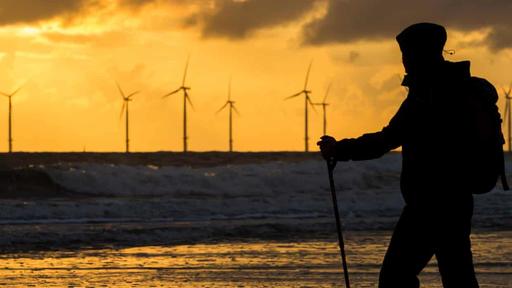 As part of a million-pound slate of planned infrastructure project, the UK prime minister said the country could become “the world leader in clean wind energy” at the Conservative Party Conference Monday.

Repeating the conservative manifesto pledge of increasing its target for offshore wind capacity from 30 gigawatts to 40 gigawatts by 2030, Johnson promised investment in ports and factories to build turbines that could create 2,000 jobs and support 60,000 more, mostly in the north of England and Scotland.

“Your kettle, your washing machine, your cooker, your heating, your plug-in electric vehicle – the whole lot of them will get their juice cleanly and without guilt from the breezes that blow around these islands”, said Johnson.

Johnson’s promise follows another green pledge at a UN summit where he vowed to protect 30 percent of the UK’s as a “boost for biodiversity”.

The government’s wind power ambitions are part of a larger 10-point plan for a green industrial revolution and reach the ambitious target of zero carbon emissions by 2050.

The prime minister also said he believed “offshore wind will be powering every home in the country” by 2030.

“Far out in the deepest waters, we will harvest the gusts, and by upgrading infrastructure in places like Teesside and Humber and Scotland and Wales, we will increase an offshore wind capacity that is already the biggest in the world…

“As Saudi Arabia is to oil, the UK is to wind… and without the damage to the environment”.

“If carried through it would help cement the UK’s global leadership in this key technology.

“But delivering 40 gigawatts of power on to the grid by 2030 requires action in this Parliament”.