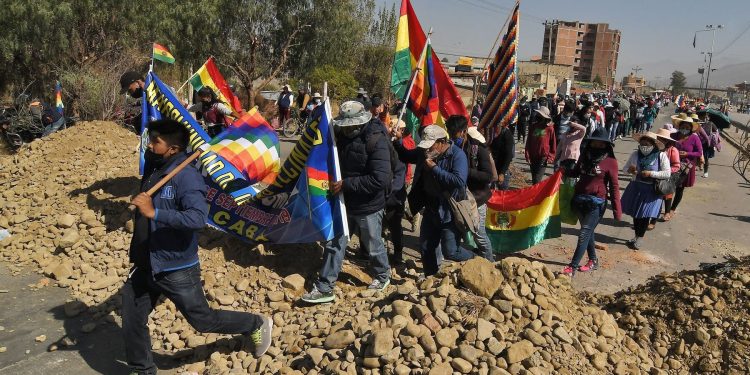 Demonstrators in Bolivia have dynamited Andean passes, scattered boulders across highways and dug trenches along rural roads to protest against repeated delays to a rerun of last October’s deeply contentious election, which led to the downfall of the long-serving leftist president, Evo Morales.

Amid a mounting death toll from the coronavirus pandemic, more than 100 roadblocks and marches nationwide – convened on Monday by Bolivia’s main workers’ union, and indigenous and campesino movements allied to Morales’s Movement Towards Socialism (Mas) – have brought the country to a standstill for six days.

The largest demonstrations since last year’s crisis come soon after the electoral authorities postponed elections originally scheduled for May for the third time – from 6 September to 18 October – citing the need to avoid a projected peak in coronavirus infections.

The ruling late last month, and the resulting backlash, has ratcheted up a sense of crisis in a country already ravaged by Covid-19, an economic slump and fierce political divisions.

“We’re not doing this out of choice,” said Jaime Quiñones Veliz, 35, part of a group of mask-wearing protesters manning a roadblock made of tires, stones and wire strung across a street in El Alto – the sprawling conurbation overlooking Bolivia’s political capital, La Paz.

“The people are desperate to know who their president will be – no matter who wins at the polls. We need a stable government,” Quiñones explained.

“We’re demanding that they respect the election date of 6 September,” he said. “If not, things are going to get even uglier.”

The caretaker government of Jeanine Áñez – a rightwing senator who came to power after Morales’s fall promising fresh elections within 90 days, and later declared her own candidacy for president – has threatened to dismantle the roadblocks by force, claiming that by preventing oxygen and ambulances from reaching hard-pressed hospitals, the blockades have killed at least 31 people.

Among the nearly 85,000 people to have been infected in Bolivia to date are Áñez herself and about half her cabinet, including the public works minister, Iván Árias.

In a wheezy audio message circulating on social media, Árias said his nurses were in tears lamenting the lack of oxygen and medicines – and were blaming Mas for the shortages.

“Bolivians, let’s not be manipulated, let’s save lives. I beg you with all my heart: life first, then we’ll sort out our political problems … We won’t allow this group of orcs, this group of crooks that has taken control of a party, to defeat us and bring us to death,” he said.

“We’re going through a critical moment,” he added. “Things have been made a lot worse by the blockades, there’s an attack on the health sector by different groups that don’t believe that the illness exists.”

But critics accused the authorities of trying to blame already-severe shortages on the opposition for political purposes, and pointed to videos online showing demonstrators temporarily dismantling roadblocks to let trucks and ambulances through.

Union authorities have threatened to seal off La Paz entirely if any roadblocks are attacked, while Morales has warned on Twitter that Áñez is plotting a “massacre”. Sporadic clashes have broken out between police, protesters, and rightwing counter-demonstrators.

Luis Arce, formerly Morales’s economy minister and the current frontrunner in the polls, said that the demonstrations reflected widespread anger – not just with “illegal manoeuvring” on the election date but with incompetence, corruption and repression under Áñez.

“The interim government wants to continue in power for eternity. They’ve demonstrated it various times,” he argued. “Every time they fix a date, the health minister says that will be the [coronavirus] peak. We’ve had so many supposed peaks, it’s a plateau.”

“We want someone to genuinely guarantee us that there’ll be elections this year.”

An abrupt decision this month to cancel the school year, a deep economic recession, intimidation of the press, and apparent moves towards privatisation in key industries like the state oil and gas firm had contributed to popular unrest, he suggested.

“You can’t blame Mas for being behind everything,” he added.

Carwil Bjork-James, a scholar of Bolivian protest movements at Vanderbilt University, suggested that an earlier date for the elections or a binding commitment to 18 October could calm tensions.

“We’re already seeing some fracturing on the government side,” he added. Áñez’s interior minister, Arturo Murillo, has lambasted the electoral court for “setting the country alight” with the latest postponement.

There are also divisions within the opposition, said Ximena Velasco-Guachalla, a political scientist at the University of Essex.

In late-night crisis talks this Saturday, the Mas signalled it would accept an intermediary date for the elections, but the union federation insisted they would remain in the streets.

“A big portion of the population, especially in the context of the virus, is just standing still. They have the most to lose and many are not taking sides,” Velasco-Guachalla added.