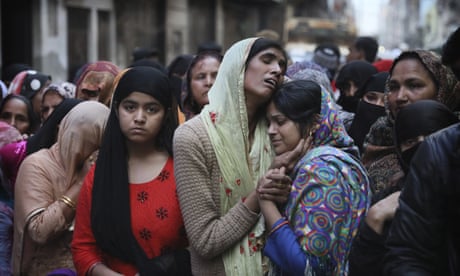 Bloomsbury India has pulled a controversial book claiming to tell the untold story of February’s Delhi riots, after the publisher was accused of giving a platform to unsubstantiated allegations and strengthening an anti-Muslim agenda.

The book, titled Delhi Riots 2020: The Untold Story, claims that the riots were the result of a conspiracy by Muslim jihadists and so-called “urban naxals”, a derogatory term used to describe left-wing activists, who had a role to play in the riots. The claim contravenes reports by organisations such as Amnesty International and the Delhi Minorities Commission that Muslims bore the brunt of the violence.

The decision to withdraw the book has prompted many in India to accuse Bloomsbury India of censorship and the book’s author, Monika Arora, denounced the publisher for allegedly falling prey to “leftist fascists”. Delhi Riots 2020 will now be published by the Indian publishing house Garuda Prakashan.

The book began to draw controversy after it emerged that Kapil Mishra, a leader from the ruling Hindu nationalist Bharatiya Janata party (BJP), would be the guest of honour at an online launch event this weekend. The BJP’s national general secretary, Bhupendra Yadav, was to be the host.

Mishra is accused of instigating the riots that ripped violently through the north-east of Delhi in February and left more than 50 people dead, after he made a fiery public speech calling on his followers to clear away Muslim protestors.

What followed was three days of the worst religious violence in the capital in decades, where Hindu mobs roamed the streets attacking Muslims and burning their homes. Muslims retaliated but three quarters of those who were killed were Muslims, and thousands of Muslims lost their homes in their violence.

The decision to have Mishra as a guest of honour at the launch provoked an outcry in India. Bloomsbury quickly issued a statement denying any involvement in the event but a backlash began to grow against the book.

Among those who voiced concerns was the prominent British writer and historian William Dalrymple, who is published by Bloomsbury.

“I alerted Bloomsbury to the growing online controversy over Delhi Riots 2020, as did several other Bloomsbury authors,” Dalrymple said. “I did not call for its banning or pulping and have never supported the banning of any book. It is now being published by another press.”

Writing on Twitter, the poet Meena Kandasamy said “the literary world must take a stand” to stop Bloomsbury publishing the book. “This is not about cancel culture,” she said. “This is about defending literature from fascism. This is about standing up against religious divide, hate speech, islamophobia and false history.”

Sudhanva Deshpande, a celebrated theatre director and author, was among those who condemned Bloomsbury and accused them of failing to carry out “elementary fact checking”.

“Make no mistake about it, this book has nothing to do with the pursuit of knowledge … this book is part of a multi-pronged attack on India’s secular fabric, on the idea of natural justice, on ethics, on rationality, on humanity,” said Deshpande, adding: “The book has blood on its hands.”

On Saturday, Bloomsbury India released a statement confirming that it was withdrawing publication of the book. “Bloomsbury India strongly supports freedom of speech but also has a deep sense of responsibility towards society,” said the publisher.

However, Bloomsbury’s announcement was met with derision and accusations of censorship from some quarters.

Arora, the book’s main author, claimed that Bloomsbury India had previously had no issues with the book, that it had been cleared by their legal team, and that the publisher had been well aware of the launch event with Mishra, despite its public denials. She accused Bloomsbury of bowing down to “digital fatwas by international leftist lobbies”.

The writer and economist Sanjeev Sanyal said he would never publish with Bloomsbury again. Sanyal described the withdrawal of the book as an act of “ideological censorship”, which demonstrated “how a tiny cabal controls Indian publishing and constantly imposes ideological censorship. We have just witnessed one example of how this insidious control is wielded.”

Another Indian Bloomsbury author Anand Ranganathan said: “This decision by Bloomsbury should be condemned by ALL writers and readers. If Bloomsbury does not retract its decision, my co-author and I have decided that we will return the substantial advance paid to us by Bloomsbury for our forthcoming book.”

On Sunday, the Indian publisher Garuda Prakashanannounced it would step in and publish Delhi Riots 2020 this week. The controversy around the book has proved lucrative: on Monday, Garuda Prakashan confirmed it had received more than 15,000 orders for the book in less than 24 hours.