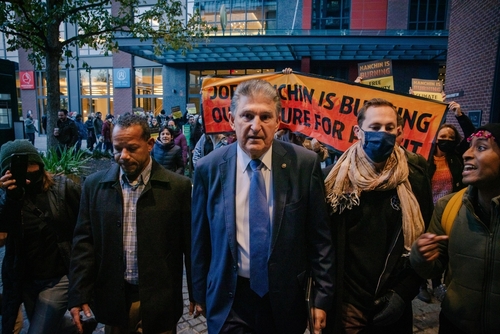 Washington,DC USA - November 4 2021: Senator Joe Manchin is confronted by climate activists leaving his boat on his way to Capitol Hill

New York (Brussels Morning) Last Sunday morning, Senator Joe Manchin, the conservative West Virginia Democrat who has been an obstacle to virtually every progressive piece of legislation proposed by President Joe Biden, announced that he would not support Biden’s Build Back Better (BBB) proposal. BBB was one of the core components of Biden’s agenda. It sought to substantially expand social service and support for working families while also committing resources to combatting climate change and promoting green energy. Without Manchin’s vote, the Democrats do not have the fifty votes in the Senate needed to pass BBB.

Naturally, Manchin’s statement, coming after many months of negotiations in which Biden and the leadership of the Democratic Party compromised and reduced the size of the bill, from $6 trillion to $3.5 trillion and finally to about $1.8 trillion, infuriated progressives and supporters of President Biden. While many on the left have expressed anger and frustration with Manchin, other pundits have added, somewhat unhelpfully, that the answer is to elect more Democrats. At the heart of the elect more Democrats narrative is the accurate notion that if there were 52, or even 51, Democrats in the Senate, rather than the current 50, Manchin would not be the deciding vote. This assertion is true, but not helpful when a Democratic majority fails to deliver a key piece of legislation.

Progressive rancor towards Manchin is understandable, but it must also be mentioned that Manchin is only relevant because the US is not a democracy. If the upper house of the American national legislature were elected with all votes being treated equally, Manchin would either not be in the senate or would be a back-bencher. The undemocratic nature of the US Senate is relatively broadly understood. Every state gets two senators, so Manchin’s home state of West Virginia, which has less than half of one percent of the US population, or about two thirds the population of Brooklyn, gets the same representation as California which has almost twelve percent of the US population. These inequalities are increasingly broadly understood in the US, but it is important to understand how this directly translates into policies that benefit, well in this case Joe Manchin’s donors, at the expense of the American people more broadly.

Manchin’s self-important posturing and ultimately rebuke of BBB highlight how the flaws in American democracy have very direct effects on policy. An American president elected in by sizeable margin, in partnership with both houses of the legislature in which his party also received a substantial majority of the votes cast in 2018 and 2020, cannot pass a piece of legislation which would help millions of Americans and modernize the country’s social infrastructure because a Democrat from West Virginia, who represents fewer than two million people, is willing to join with a Republican caucus dominated by Senators from similarly small states in opposing the bill.

The undemocratic nature of the US Senate is not just a quirk of the American system. Rather, it is an example of what lies at the heart of the current American political crisis. While pundits earnestly worry about a Constitutional crisis, they miss the point that the crisis is the Constitution itself. The Constitution is a brilliant, innovative and massively important document, but it is also a political document that arose out of a need to compromise, particularly with slave-owners, and contains several very important undemocratic components such as the US Senate, the electoral college and, at least as it is currently interpreted, the Second Amendment.

The saga of Manchin and BBB is an acute reminder that five or so years into a deepening crisis of democracy, the American people and political elites must wrestle with the very abstract and difficult questions of whether we are comfortable with allowing the Constitution to continue to obstruct democracy, and if not, what are our options? The primacy of the elect more Democrats narrative is a reminder of how deeply the American people and media continue to understand politics through a lens that is uncritical of the Constitution. Unless that changes, democracy will be further undermined, and the US will continue to be overwhelmed by events like Covid that require rational and active policies supported by the American people.

This unquestioning loyalty to a deeply problematic document is the product of American culture and the education system which, with extremely few exceptions, promotes the Constitution as uniquely perfect. However, even if that can be overcome, something which seems to be occurring as more Americans may question the Constitution, there is an even larger obstacle. Americans are not prepared or able to think about what our government, or even our country, would look like without our Constitution. We have treated the Constitution as a sacred text for so long that if we shatter that conceit, we are left with very little guidance for how to form a functioning, cohesive and democratic state, so we continue to accept the Constitution even as its democratic deficits directly immiserate so many of us. That is the American conundrum as we head into 2022. Happy New Year.