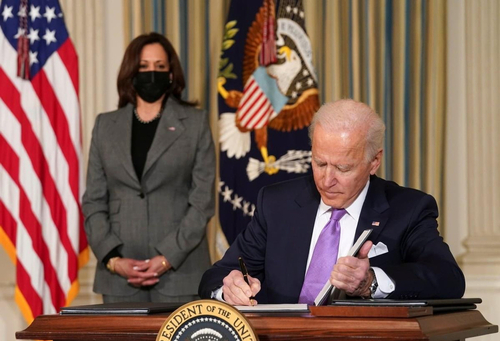 The USA, (Brussels Morning Newspaper) The war in Ukraine has transformed Joe Biden’s presidency. In mid-February President Biden, despite a deceptively impressive record of accomplishments, was in what might nicely be described as the doldrums. His domestic political agenda was stalled; after some initial successes, the fight against Covid was not going as well as the administration had hoped; Biden’s most memorable foray into foreign policy had been the poorly planned and not well executed withdrawal from Afghanistan. All of this contributed to the President’s popularity rating being stuck in the low 40s and increased chatter that he would not, and should not, run for a second term in 2024. Worst of all, from the Democrats’ perspective, Donald Trump, the frontrunner for the Republican nomination next time around seemed to have a fair shot at a return to the White House.

It would be an exaggeration to say that Biden has turned all this around. Republican criticism has remained strong, and he is far from a shoo-in for re-election. However, his poll numbers have gone up for the first time in months. Additionally, the war has given Biden, who has long been more interested in foreign than domestic policy, a new focus for his presidency. Although Biden did not want this war, this may be the presidency he wanted.

The war itself has unified the people of the US unlike anything in recent years, with substantial majorities agreeing with Biden’s basic position that the war is the fault of Russia and its brutal authoritarian President Vladimir Putin, and agreed too that the US should do what it can to support Ukraine without escalating the conflict. This virtual consensus forms the foundation for this new phase of the Biden presidency. It comes as a welcome relief from one where every domestic issue — from vaccines to economic policy to voting rights — has been breaking along partisan lines, with Democrats on one side, Republicans on the other, as Senators Joe Manchin and Kyrsten Sinema postured and flattered themselves by passing off egotism and fealty to donors as a display of some kind of belief in bipartisanship and a better way to do politics.

The key question facing the Biden administration is whether or not this consensus can last. If it does, Biden will be able to present himself as a kind of semi-wartime president. The US is not directly involved in the war in Ukraine, but the Biden administration, with the support of Congress, has sent an enormous amount of military supplies and equipment to Ukraine and has been at the centre of what amounts to an economic war against Russia. As long as US opinion continues to support Biden’s position on the war, his approval ratings will continue to benefit and Donald Trump, who has long had a sleazy relationship with Russia and has generally behaved like a political client of Putin’s, will have a more difficult time persuading voters that he should be sent back to the White House in 2024.

And that is precisely why the consensus is threatened. Trump and the people around him understand full well that the burst of hatred for Putin in the US over the last month or so is very bad for Trump’s political future. That helps explain why some on the right-wing fringes have broken with the new consensus and presented views that are much more sympathetic to Russia, sounding at times almost like the Russian propaganda that is coming out of the Kremlin. It takes time for these issues to move from the political fringe to mainstream conservative opinions, but it does not take a lot of time.

Two very recent examples of this can be seen in the discourse around both vaccines and the January 6th insurrection. In December 2020, when vaccines were first introduced, only the far right — and a few people on the far left — questioned the vaccines. However, by around April 2021, anti-vaccine sentiments were extremely widespread among almost all segments of the GOP. Similarly, in the days following January 6th last year, most Republicans were critical of the insurrection. A few months later, the all but official position of the party was that the events of January 6th were not that big of a deal.

The war in Ukraine is likely to continue for quite some time. Even if the current phase of the conflict wraps up soon, and there is no guarantee of that, the questions of how to support Ukraine and the sanctions against Russia will continue for at least several more months and probably much longer. This allows enough time for the GOP to move towards the pro-Russia position that the party’s de facto leader Donald Trump has long embraced. Rising inflation, more money being sent to Ukraine and Biden’s maintenance of a strong pro-Ukraine position will all make it easier for far right views to gain traction that this is Biden’s war, that the Biden family has long had a sleazy relationship with Ukraine and that the war is causing inflation, to the point where it becomes more or less the official position of the Republican Party.

For Biden, the challenge is to maintain the consensus view of Putin and Ukraine by continuing to show the American people the horrors of what is occurring in Ukraine and why it is imperative that the US do something about it. The latter is more difficult than the former, but if Biden cannot do that, then the transformation of his presidency will be brief and a return to stalled policy proposals and low approval ratings will be swift.