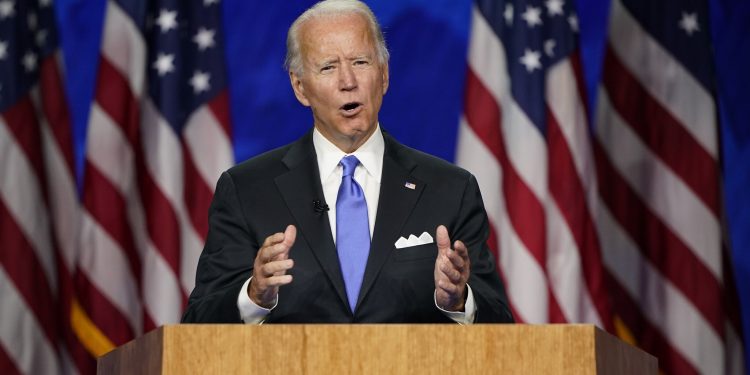 Joe Biden has vowed to unite America and lead the country to overcome “this season of darkness”, as he accepted the Democratic presidential nomination on Thursday evening, a long-sought moment that comes more than 30 years after he first ran for president.

Biden, 77, denied by the pandemic the chance to accept the nomination before a roaring crowd, delivered the most important speech of his nearly half a century in public life from a silent ballroom inside the Chase Center, near his home in Wilmington, Delaware, on the last night of the virtual Democratic national convention.

“Here and now I give you my word, if you entrust me with the presidency, I will draw on the best of us, not the worst,” Biden said. “We can and will overcome this season of darkness. I will be an ally of the light, not the darkness.”

“United we can, and will, overcome this season of darkness in America. We will choose hope over fear, facts over fiction, fairness over privilege.”

Biden presented November’s election as a battle for the soul of the nation, echoing the words he used when he launched his third presidential bid last year. He said the country faces four historic crises: the coronavirus pandemic, the economic fallout, racial injustice and climate change.

Without mentioning his rival by name, Biden accused Donald Trump of having “failed in his most basic duty to the nation” by mishandling the pandemic. If elected, he pledged to implement a national strategy to tackle it, including a national mandate on wearing a mask as “a patriotic duty”.

“The tragedy of where we are today is it didn’t have to be this bad,” he said of the crisis, which has killed more than 170,000 Americans and infected more than 5 million, far more than any other country in the world.

Just outside, under a crescent moon, supporters from Biden’s hometown celebrated at a safe distance as Biden and his wife, Jill, emerged after the speech to watch fireworks. In a parking lot, staged like a drive-in movie theater, attendees sat on their car hoods, others in the beds of their trucks, waving American flags and blaring car horns in a show of support for a man described earlier this week as Delaware’s “favorite son”.

With just 75 days left before the election, Biden remains in a strong position, consistently leading Trump in national and battleground state polls, and Democrats largely united behind him.The evening before, Kamala Harris took her place in history, becoming the first Black woman and first Asian American to accept the vice presidential nomination of a major party.

Across the four nights, Americans were introduced anew to the former vice-president. His family, friends, colleagues and former political rivals – from the president he served for eight years to a New York city security guard who briefly rode on an elevator with him – testified to his character. Electing Biden, they argued, would amount to a stark repudiation of Trumpism.

They cast him as a singular match from the moment, a public servant whose deep experience and sense of decency had uniquely prepared him to lead a nation stricken by the compounding crises emanating from a global pandemic, economic turmoil and racial injustice.

The presidential nomination caps a decades-long quest for Biden, who has sought the presidency intermittently since 1987. In his first run, as a young senator, Biden ran as a generational change candidate but his campaign ended ignobly amid a plagiarism scandal and a sense that he lacked a policy core.

Twenty years later, he ran again, on a platform that emphasized his long record and experience. But he faded in the primary race, outshined by the history-making candidacies of Barack Obama and Hillary Clinton.

Biden again considered running in 2016. But after the death of his eldest son, Beau, he formally ruled out the possibility, in a decision many believed extinguished once and for all his dream of occupying the Oval Office.

However, driven by Trump’s equivocation on the white nationalist violence that erupted in Charlottesville, Biden entered the 2020 race with the imperative to “restore the soul of our nation”.

The speakers at the convention on Thursday, which included several of his former primary rivals, were a reflection of how uncertain Biden’s path to the nomination was. He faced the most diverse field of candidates that had even run, and that better embodied a young, diverse and increasingly progressive Democratic party. But after faltering early, he staged a comeback with the help of Black voters in South Carolina.

In a pre-taped video call between several of the 2020 candidates, which Cory Booker likened to an exit interview with the contestants who had been “voted off the island”, each shared their favorite memory of Biden. Minnesota senator Amy Klobuchar recalled delivering a late night speech to an empty Senate chamber, wondering if even her mother was watching. When she walked off the floor, Biden called to say he’d just seen her speak.

“Every American must now decide: can America be a place where faith is about healing and not exclusion?” Pete Buttigieg, the former mayor of South Bend, Indiana, who ran against Biden in the primary, is expected to say on Thursday night.

Biden’s children, Hunter Biden and Ashley Biden, to introduced their father. While Ashley has been a presence on the campaign, hosting events for Biden, Hunter has largely remained behind the scenes since Republicans turned his past work for a Ukrainian gas company while his father was vice-president into a political liability.

Trump was ultimately impeached by the House over his efforts to pressure Ukraine to investigate the Bidens. Despite ongoing efforts by Trump allies to show otherwise, there is no evidence of corruption by either Biden.

Loathe to cede the national spotlight, Trump has spent the week assailing Biden on a tour of battleground states that included a stop on Thursday near Biden’s birthplace in Pennsylvania.

Across the four-day convention, prominent Republicans including former governor John Kasich testified to Biden’s character and consensus-minded approach to governing while progressive leaders such as Senator Elizabeth Warren raised the possibility that Biden had the opportunity to be a transformational figure who would usher in sweeping economic and social change.

Yet highly-produced videos and soaring speeches glossed over the internal divisions that simmer below the show of party’s unity against the Trump presidency.

Many progressives are uncomfortable with Biden’s pragmatism, his ties to Wall Street and his verbal miscues, particularly on issues of race.

His age, and his own insinuations that he might only serve one term, if elected, have intensified the focus on Harris, who many view as the future of the party that is increasingly diverse, female and pluralistic. Though Democrats widely embraced her as the vice-presidential nominee, some progressives remain skeptical of her prosecutorial record.

Andrew Yang, a tech entrepreneur who centered his 2020 presidential campaign around the issue of universal basic income, asked voters to “give them the chance”.

“They understand the problems we face,” he said. “They are parents and patriots who want the best for our country.”