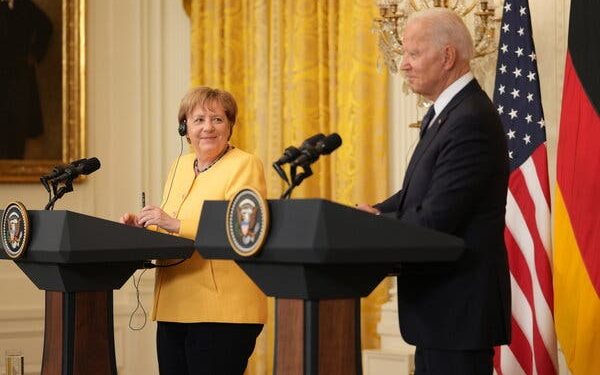 Biden did point out that the US and Germany will consider measures they might take in the event that Russia’s moves present a threat, Reuters reports.

The Biden administration lifted US sanctions on Nord Stream 2 that had been imposed by its Trump predecessor. Biden, noting that the pipeline is almost complete, said that “Russia must not be allowed to use energy as a weapon to coerce or threaten its neighbours”.

In May, Washington declared that Nord Stream 2 and its CEO had engaged in sanctionable behaviour. Nevertheless, it lifted the sanctions.

The gas pipeline — worth some 11 billion dollars — bypasses Ukraine, which collects transit fees from the first Nord Stream that was launched in 2011. Nord Stream 2 is led by the Russian Gazprom energy giant and its Western partners.

Merkel observed that the EU could impose sanctions on Russia if Moscow breaks the agreement to ship natural gas through Ukraine. The bloc, she said, has “a number of instruments” at its disposal.

She acknowledged that Germany and the US do not see eye-to-eye on Nord Stream 2, but she also insisted that both would continue to support Ukraine’s sovereignty and territorial integrity.

The two leaders agreed to work together to strengthen the green push in emerging economies, which includes investments in Central and Eastern Europe.

The US and Germany have been collaborating on an agreement to avoid US sanctions against Nord Stream. The hope is that this will be finalised before August.

Biden is under pressure from US lawmakers to reimpose the sanctions. Republican Senator Ted Cruz has declared that he intends holding up Biden’s ambassadorial nominations until such time as the sanctions are reimposed.