Biden and the Federal Judiciary 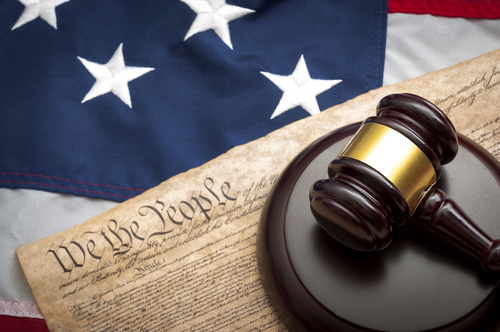 American flag, US constitution and a judge's gavel symbolizing the American justice system or the Judicial Branch of government ( Judiciary )

The USA, (Brussels Morning Newspaper) Justice Stephen Breyer’s announcement that he is stepping down from the US Supreme Court after serving on the highest court in the land for almost 28 years inevitably has set off a spate of speculation about who President Biden will pick as his replacement.

During the presidential campaign, Joe Biden pledged that if elected he would appoint the first African American woman to the court. All the signs indicate that Biden intends to honor that pledge and the names of several African American women have been mentioned as possible candidates.

We cannot know for certain who Biden will choose, but we know that he must get his nominee confirmed. This looks likely because even Democratic senators like Kyrsten Sinema from Arizona and Joe Manchin from West Virginia, both of whom have opposed important parts of Biden’s legislative agenda, have supported Biden’s previous nominees to federal court positions. Anything can happen, but there is a good chance the caucus will stay together and confirm whoever is nominated. Although there would continue to be a 6-3 conservative majority on the court, replacing Breyer with a younger liberal justice who will bring a new perspective to the court is good news for the Democrats.

If that nominee is confirmed, she will not be the first federal judge appointed by Biden and confirmed by the Senate. In fact, thus far, just over a year into his presidency, Biden has already had 42 of his nominees confirmed. That represents the most any president has had confirmed in his first year in office since 1981. It is also a piece of political information that while very important for Americans as a whole, is little known, even among progressive voters, who should care a lot about this.

The fault for this does not lie with the voters, but with the Biden administration. It reveals the inability of the White House to effectively communicate its accomplishments. The first year of the Biden presidency has been far from perfect. Two new variants of COVID, inflation, the poorly managed withdrawal from Afghanistan and the inability to pass Biden’s Build Back Better bill have not only marred his first year in office, but they have become part of a negative group of stories that have defined his presidency thus far — and it is the Biden administration that has let this happen.

This is unfortunate for the President since it doesn’t take much scrutiny to see that his administration has accomplished quite a bit. The massive COVID relief bill, the infrastructure bill, the early success in getting vaccines out despite a Republican-supported anti-vaccine movement and the number of federal judges appointed and confirmed all count among President Biden’s most significant accomplishments. Even the withdrawal from Afghanistan, which is now remembered primarily for its difficulty and the horrific optics around evacuating people from the country, was a case of Biden implementing a popular policy that previous presidents had promised and not delivered.

Biden’s poor poll numbers over the last several months, which, if unchanged, will probably lead to a big Republican win in the midterm elections, are in large part attributable to the battery of economic, political and public health problems that the country continues to face. However, these numbers also reflect the fact that Biden has not been getting credit for his accomplishments. Admittedly, the media environment has been very tough, but getting credit for the things you do right is something all presidents, and other chief executives, must be able to do.

The failure of the Biden administration in this area has taken two forms. First, it has simply not made sufficient effort to draw attention to and take credit for its accomplishments. The COVID relief cheques went out earlier this year to little fanfare from the White House. Similarly, the infrastructure bill, which, by any measure, was an enormous accomplishment that will help communities around the country, has receded from the public consciousness to become something that seemingly only gets mentioned by Washington insiders.

The second misstep the Biden administration made was to allow expectations to be extremely elevated during the early months of his presidency. In those halcyon days it was not altogether uncommon to find articles and commentaries suggesting that Biden was going to be the new Franklin D. Roosevelt and remake American social policy. There are only a handful of US politicians to whom no president should ever allow himself to be compared. Abraham Lincoln is one. FDR is another. If the bar for a successful Biden presidency was the New Deal, then he was always going to be seen as a failure. Yet for some inexplicable reason, Biden allowed that framework to emerge.

As the midterm election approaches, the Democrats are in danger of having an election that is about their failures to end the pandemic, combat inflation and deliver a massive spending bill. Nonetheless, it is not too late to make the election about the Democrats’ success in vaccinations, infrastructure, COVID relief, and, for the base of the party, judicial appointments. A successful Supreme Court confirmation might just be the occasion for the messaging around Biden to change, but it won’t happen unless the White House takes the lead on getting the message out.