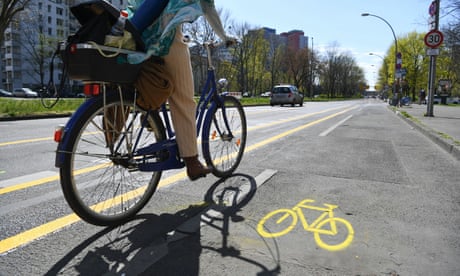 A coronavirus-related drop in traffic and new protected bike lanes have failed to make Berlin’s roads safer for cyclists, as the German capital reports a four-year record in fatalities.

A woman run over by a right-turning articulated lorry in the district of Reinickendorf on Friday became Berlin’s 14th official cycling fatality of 2020 – more than twice as many as the six recorded in 2019.

The prospect of less congested roads due to more people working from home had initially spurred hopes that the global pandemic could permanently change the infrastructure of cities – and make them more friendly for those commuting by bike.

Such experimental pandemic initiatives in the German capital followed numerous other traffic-calming schemes and temporary road closures for cars, as well as a Vision Zero pledge to eliminate cycling fatalities for good.

But according to Siegfried Brockmann, an accident researcher for the German Insurance Association, the coronavirus crisis has mainly reduced the number of passengers on public transport, while the number of cars on the city’s roads has risen back to normal levels or higher.

Widening cycle paths not only failed to address those areas where accidents were most likely to occur, but could also have had an adverse effect, Brockmann suggested.

“If I speed up the cycling traffic, that doesn’t make it safer,” he said. “Two thirds of accidents involving but not caused by cyclists occur at crossings, turnings or on property driveways – and so far authorities have failed to come up with solutions to reduce the risk.”

Berlin’s senator for transport, Regine Günther, told the local newspaper Der Tagesspiegel that her government would prioritise equipping junctions with segregated traffic-light sequences for cyclists and automobiles, but conceded overhauling the system was slow work.

Ragnhild Sørensen, from the Berlin-based cycling pressure group Changing Cities, appealed to local and national politicians to come down harder on drivers of articulated lorries in inner-city areas, for example by making it mandatory to equip vehicles with video technology that alerts drivers to people outside their field of vision.

“Cyclists are dropping like flies,” Sørensen said. “We need to treat this problem with the same rigour as organised crime. The state needs to investigate the freight companies whose drivers cause these accidents.”

Articulated lorries were involved in six of the 14 accidents resulting in cycling fatalities in Berlin this year. In a further incident, which was not officially recorded as a traffic accident, a journalist, 35, waiting at a traffic light, was run over by a lorry when its driver lost control of the vehicle.