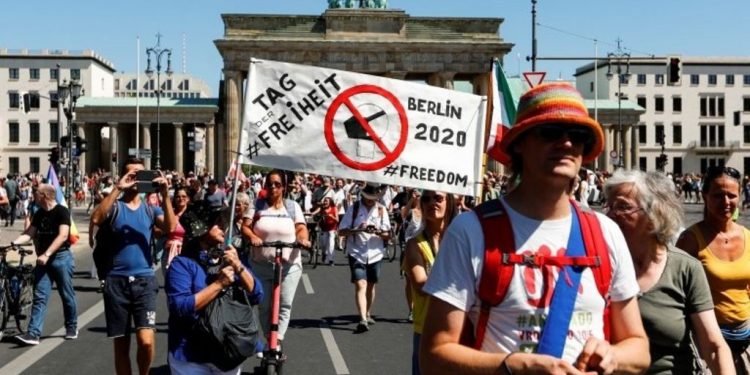 German leaders are divided over whether to restrict the rights of demonstrators, after tens of thousands of people who took to the streets of Berlin at the weekend failed to abide by hygiene and distancing rules.

According to officials, up to 20,000 people took part in demonstrations against the government’s coronavirus restrictions at different locations across Berlin on Saturday, amalgamating for a joint rally later in the day. Organisers said up to 1.3 million people took part, a figure that police denied.

The gathering was broken up by police after repeated warnings over participants’ failure to wear face coverings or keep a 1.5-metre distance from each other were ignored.

During attempts to break up the gathering, which organisers called End of the Pandemic – Day of Freedom, some protesters turned violent. Police said 133 demonstrators were arrested and 45 officers were injured, with some needing to be hospitalised. Several journalists reported being verbally or physically attacked.

The demonstrations drew criticism from almost all political parties, except the far-right Alternative für Deutschland (AfD) and the pro-business Free Democrats (FDP), who defended the participants’ right to protest.

Saskia Esken, the head of the Social Democrats (SPD), criticised the police for intervening too late. “They could have broken up the demonstration far earlier than they did,” she told German television.

Esken herself drew criticism for referring to the protesters on Twitter as “thousands of Covidioten” – a play on Covid and idiots. She defended her remarks, stating that the participants were “enemies of democracy”.

The demonstrators spanned a wide range of interest groups, from left to rightwing extremists, including members of the neo-Nazi NPD party and Reichsbürger or Citizens of the Reich – who reject the legitimacy of the German state – as well as followers of QAnon, the rightwing conspiracy theory group , members of the Querdenken or Lateral Thinkers movement, followers of the anti-Islam protest group Pegida, anti-vaxxers and self-declared esotericists. Some individuals said they were not affiliated to any group.

The groups have met before, but in smaller numbers. There is concern not only about the increasing number of people who seem to be rejecting government measures to suppress the virus, but also about the possible impact of the protests on Germany’s infection levels.

Germany’s infection rate has crept up in the last two weeks to a level not seen since mid-May.

Some social scientists say it is Germany’s success, relative to other countries, in keeping the virus under control that has helped fuel the sceptics, referring to a “prevention paradox”.

Stephan Mayer, interior spokesman for the Bavaria-based Christian Social Union, called the participants “naive” for, as he put it, “failing to see what is happening outside of Germany”, in countries that have not managed to control their infection rates. “It is hard to have any understanding for how the majority of demonstrators act,” he said.

Organisers of protests in Germany do not generally require a permit, but as a rule demonstrations do have to be registered in advance. Germany’s 16 states banned all large demonstrations in the first few months of the pandemic but have gradually loosened the restrictions.

When demonstrations pose a “threat to the general public”, they should be allowed to take place only “under very much stricter regulations or else not be allowed at all”, Armin Schuster, of the Christian Democratic Union, told the Rheinische Post.

Helmut Dedy, the head of the Association of German Cities, which represents the interests of 200 municipalities, said that while the right to demonstrate was of great value, it could not be acceptable “for a demonstration itself to develop into a coronavirus hotspot. It is irresponsible for the rules and regulations to be ignored in such a restricted space.”

But Wolfgang Kubicki, the vice-president of Germany’s parliament, the Bundestag, and a leading member of the FDP, said he had sympathy for the demonstrators. Among them, he said, “were a considerable number of people who … are quite simply confused, because they no longer know why these measures are being implemented. Politicians have failed to explain to them exactly just what the goal of the measures is.”

Tino Chrupalla, a co-chair of AfD, said the demonstrators were being falsely accused. “I cannot recognise any wrongdoing,” he told the German broadcaster ARD. “I followed the demonstration, which was peaceful. The people went on to the streets to defend their basic rights and their civil liberties, and that’s something one can only welcome.”