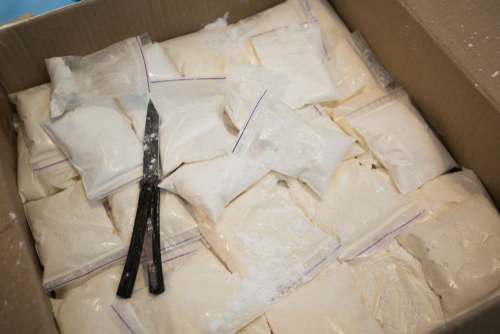 Brussels (Brussels Morning) Belgium and the Netherlands have become main hubs for cocaine trafficking into Europe, supplanting Spain as the main route of entry into European countries, a Europol report has revealed.

Taking advantage of the increased supply of cocaine, especially from Colombia, criminal organisations are using the ports of Rotterdam (Netherlands), Hamburg (Germany) and especially Antwerp (Belgium) to bring the drug to the Netherlands, from where it is then transported across Europe.

“The epicentre of the cocaine market in Europe has shifted northward,” reads the Europol report.

Europol says that the growing use of containerised cargo, supported by the large capacities of the port terminals in Antwerp, Rotterdam and Hamburg “consolidated the role of the Netherlands as a transit zone” for cocaine, the report states.

The coastal areas of the North Sea have supplanted the Iberian Peninsula as the main entry point for cocaine arriving in Europe.

In 2020 alone, cocaine seizures in Antwerp totaled 65.6 tons. In February, Germany and Belgium made a record seizure of 23 tons, which were hidden in shipping containers.

“Nearly 40% of the criminal groups active in Europe are involved in drugs trafficking, and the cocaine trade generates multi-billion euro in criminal profits,” said Julia Viedma, Head of Department of the Operational and Analysis Centre at Europol.

“Understanding better the challenges we face will help us to counter more effectively the violent threat that cocaine trafficking networks represent to our communities,” added Viedma.

EU cocaine made in Colombia

The European cocaine market has been significantly boosted by the increase in supply, especially since the peace agreement signed in 2016 between the Revolutionary Armed Forces of Colombia (FARC) and the country’s government, which led to the emergence of different groups vying for control of the country’s cocaine production.

The FARC controls part of the area where cocaine is grown and regulate access to the supply of production available to intermediaries and international traffickers.

The 2016 peace agreement put an end to the FARC’s integrated command structure and led to the emergence of different fragmentation groups that exercise control over different regions and cocaine production” in these areas, the report states.

Europol claims such fracture has multiplied the potential for the formation of new alliances and partnerships.

European criminal organisations altered the strategy, forming alliances with these groups without intermediaries and obtaining cocaine directly from the source.

After cannabis, cocaine is the second most commonly-used drug in Western and Central Europe, with the latest estimates pointing to 4.4 million total users by 2020.

Europol’s report was launched as part of the work programme of CRIMJUST – Strengthening criminal justice cooperation along drug trafficking routes within the framework of the Global Illicit Flows Programme of the European Union.