Belgian Emigres and a Wildfire

by Jack Gaioni
in Our pick 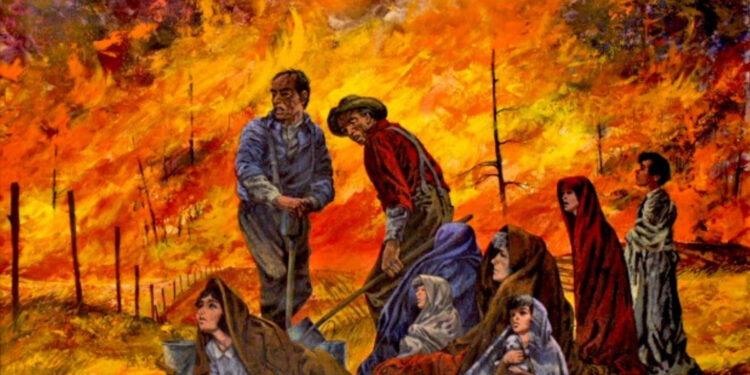 Belgium, (Brussels Morning Newspaper) On the eve of October 18th, 1871, the skies north of Brussels took on a menacing crimson-red hue. The winds increased from mild breezes to hurricane force in a matter of minutes. An unidentifiable crackling noise filled the air. What would become known as “fire tornados” or “firestorms” swept down upon Brussels? Within two hours these fires had obliterated Brussels in a Hiroshima-type fashion. The vision was unworldly.

Up to 2,500 people perished. You might correctly wonder: Is the preceding scenario an example of science fiction?  Or an unknown war story?  Perhaps an apocalyptic novel? No, in fact, this was an only-too-real event that took place in Brussels…. Brussels, Wisconsin, U.S.A. What follows is the true but little-known back story of that Wisconsin village and a tragic wildfire—-both of which have a direct link to Belgium. Let me explain….

The first evidence of a Belgian settlement in the United States dates back to 1641 when 30 families, mostly Walloon, arrived in New York’s harbor aboard the transport ship Nieuw Nederlands. The first recorded Belgian to visit what is now Wisconsin was Father Louis Hennepin who, in 1675 began to map the upper Great Lakes. Very few Belgians followed him for the next 200 years. The official record (albeit incomplete) shows that in 1853, 10-15 farming families left the Brabant province in Belgium and arrived in northeastern Wisconsin.

The emigrating settlers were motivated by crop failures and industrial decline in their homeland. They were also actively recruited by the newly admitted state of Wisconsin (1848). Settlements with names like Namar, Rosiere, Brussels, Charleroi, Waterloo, Luxemburg, Grand-Leez, etc.— began to incorporate within the new state.    Today this part of northeastern Wisconsin has– by far—the most Belgian descendants in North America.

The aforementioned firestorm, known as The Peshtigo Fire has the tragic designation as the “deadliest wildfire in recorded world history”. (You read that correctly!). There were estimated to be as many as 2,500 deaths but the accurate death toll is unknown because nearly all local birth/population records were destroyed in the fire. Additionally, so many people perished that there was no one left who could identify the bodies. Remarkably, even today after 170 years, human remains are still being discovered. 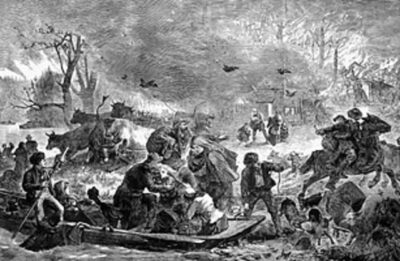 The firestorm had “superheated” flames of 2,000 degrees Fahrenheit and reached a height of 5,000 feet. It generated winds up to 110 mph and cut a swath of destruction, 10 X 60 miles. The Peshtigo Fire has been described as a “natural nuclear explosion”. Not only did it obliterate Brussels but also many of the aforementioned Belgian named villages. It changed the Belgian émigré’s culture.

Before The Peshtigo Fire, the local economies had been somewhat one-dimensional with lumberjacking, sawmills, shingles, and dimensional lumber providing the area’s main source of revenue. After all, Wisconsin was a wooded wilderness. This natural disaster transitioned the settlers to a more diversified agricultural economy.  The émigré communities soon learned that fruit trees thrived in this part of Wisconsin. Adequate spring moisture, cool summers, and favorable soil conditions lent themselves to the special fitness required for fruit growing. Orchards of apples, plums, peach, and pear trees began to dot the landscape around Brussels and the surrounding communities.

The bountiful cherry crops especially began to receive national attention. Certainly, there were profits in the “fresh fruit cherry market” but the Belgian emigre communities took it a step further—they canned the product for national distribution. Local industries thrived and technological innovations such as a cherry-specific mechanical harvester and a “pitting “machine got these fresh fruits into cans and jars with an extraordinary “tree-ripe freshness”.  Their innovations changed the industry. Agriculture and small fruit-related cottage industries remain a prosperous post-Peshtigo Fire economy. 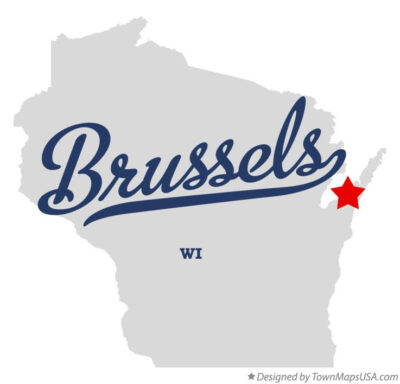 The architecture of these Belgian communities changed as well. Practically all of the wooden homes, barns, and structures were destroyed in the great fire. This fact changed the way emigres were built. It literally changed their architecture. They looked to their homeland and began to build in brick and stone. Ultimately, this adjustment gave way to the distinctive architecture of their Belgian roots. Instead of simple wooden frame structures, the Belgians built 2-story brick structures with brick or dolomite veneers, replete with arched-brick lintels and bulls-eyed windows under the roof peak. Many devote Catholics erected small roadside votive chapels like those in their native country. Materials and design are distinct from other buildings in Wisconsin but remarkably reminiscent of the Belgian homeland.

The Peshtigo Fire changed the Belgian emigre’s settlement economies, lifestyle, and architecture but it did not change the strong cultural ties to their homeland. Today, Belgian culture is alive and well in Brussels and the surrounding communities. Belgian National Day (July 21st) is a popular community celebration as is the Kermis Harvest Festival. The Walloon and Flemish languages are still taught while Belgian surnames abound. Traditional food such as booyah, tripe, and Jutt remain popular. Bicentennial visits between the two countries are popular travel venues. Even legal assistance is available for those interested in dual citizenship.

The process of emigration by its very definition is an exercise in change and adaptation. A new language, a new country with new customs, a break from traditional habits, etc. all require personal fortitude. To successfully make that adjustment, especially after the great magnitude of The Peshtigo Fire, was no small feat.