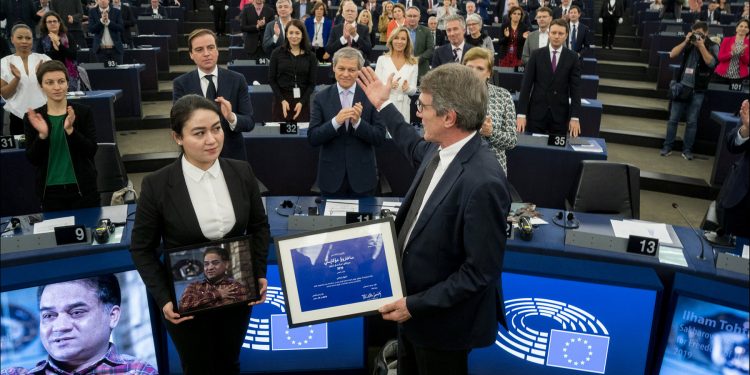 Nominations for this year’s Sakharov Prize were presented in Brussels this week. The main candidates for the freedom of thought award are the members of the Belarusian opposition, either collectively or on an individual basis as a special gesture of support for presidential candidate Svietlana Tsikhanouskaya. Other candidates are the Archbishop of Mosul, the Guapinol activists in Honduras and the Polish LGBTI activist group running the website Atlas of Hate. The winner will be announced in three weeks’ time with the awards ceremony to follow in December at the Parliament’s last plenary of the year.

The Sakharov Prize for Freedom of Thought,has been awarded annually since 1988 by the European Parliament. It commemorates the Soviet era, Russian dissident and scientist Andrei Sakharov and honours human rights activists –as individuals or groups – who have dedicated themselves to the defence of human rights and fundamental freedoms.

The prize is one of the most significant EU human right awards and is intended to highlight abuses of fundamental rights and draw attention to the political struggle of both the nominees and the eventual winner. Historically, the Sakharov Prize has been awarded to individuals who, often at great risk to themselves, struggle to defend human rights and basic freedoms in the face of oppressive and authoritarian governance. Such acts of courage and defiance entail significant risks for defenders, who are often harassed, persecuted and even deprived of their personal freedom. The first to receive the Sakharov Prize was Nelson Mandela.

The award serves as an opportunity for the European Parliament to train the spotlight on repressive actions by specific governments and to show solidarity and support for the human rights campaigners who stand up to them. The intention behind the award is to generate awareness and cast light not just on the kind of measures used to suppress human rights and to deprive activists of their basic rights and freedoms but to persuade the authorities in question through parliamentary contact and diplomacy to put a stop to such practices. The Sakharov Prize award serves both as advocate for and endorsement of the rights and freedoms its principled and courageous nominees and winners all aspire to enact and to uphold. .

In this day and age, a matter of growing concern is the additional risk political prisoners and prisoners of conscience face being held in overcrowded and unhealthy facilities without sufficient access to medical care.

Last year’s Sakharov Prize winner Ilham Tohti, a vigorous advocate for the rights of the Moslem Uyghur people in China’s westernmost province Xinjiang (originally East Turkestan with reference to the Uyghurs’ Turkish and Central Asian roots) is still imprisoned in China, sentenced for so-called separatism that amounts to treason in challenging the centralised Chinese system. Through its award to Tohti, the European Parliament condemned the state-directed religious oppression and the suppression of non-violent dissent by an authoritarian state, China.

The Prize is awarded on the basis of official nominations, which the European Parliament’s Foreign Affairs and Development committees then selects from to produce a shortlist of three finalists. Finally, the President of the European Parliament and the leaders of the political groups nominate the laureate of the year.

Sviatlana Tsikhanouskaya is the leader of the democratic opposition in Belarus, as well as a teacher and a human rights and political activist. She contested the Belarusian presidential elections in 2020 as the main opposition candidate running against Alexander Lukashenko’s regime. The election was marred by fraud and the result denounced by protestors across the country, who formed a movement that has since been increasingly repressed by the regime. Sviatlana had to flee to Lithuania lest she was imprisoned for demanding a recount of votes. Her nomination for the Sakharov Prize is in recognition of all the Belarusian people who have opposed Lukashenko’s dictatorship for generations and who have demanded free and fair elections, democratic governance, fundamental rights and an end to authoritarian repression on the European continent.

Among the Guapinol activists, Berta Cáceres was a well-known ecologist and activist, whose fight for the land rights of the Lenka indigenous community in Honduras continues. The battle against land-grabbing and illegal logging cost her life; Berta Cáceres was killed on 2 March 2016 by a group of armed men, after launching a campaign against the Agua Zarca project, which aimed at building a dam to produce hydroelectric power and posed serious environmental threats and damage to the Lenka’s lands. After her murder, those who sought justice for Cáceres and continued her fight against the actions of powerful industrial enterprises have been subject to threats and stigmatised.

The struggle against injustice and impunity in Honduras is on-going. The country remains the most dangerous in the world for defenders of the land and the environment, a group subject to the highest rate of murders per capita.

Jakub Gawron, Paulina Pajak, Paweł Preneta and Kamil Maczuga are a group of Polish LGBTI activists who founded the Atlas of Hate website in 2019. The website is dedicated to mapping and monitoring a number of local Polish municipalities that had declared themselves “LGBTI-free zones”, thereby showcasing the negativity towards LGBTI people in Poland and the discrimination these communities face. Their struggle for the rule of law, democracy and fundamental rights amply qualifies the group as nominees for the award for the Sakharov Prize.