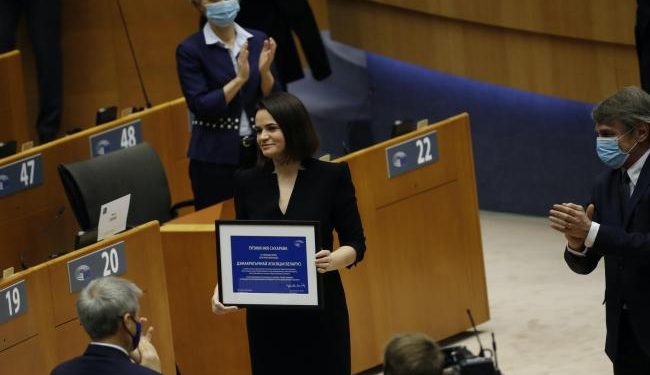 Brussels (Brussels Morning) Belarusian democratic opposition leader Sviatlana Tsikhanouskaya collected the European Parliament’s Sakharov Prize for Freedom of Thought in front of an unusually empty plenary room in Brussels on Wednesday. The prize represents the EU’s highest distinction for human rights defenders and was awarded to the democratic opposition in Belarus as a whole.

”We want our country to be free of dictatorship and violence. Without a free Belarus there will be no free Europe,” Tsikhanouskaya said at the award ceremony which was held in front of the MEPs linked in by videoconference to the session.

Protests erupted in Belarus following the August presidential election that according to the official count resulted in a victory for President Lukashenko. The EU has refused to acknowledge the results and has imposed several rounds of sanctions on Lukashenko and his closest associates.

The peaceful rallies that brought hundreds of thousands of Belarusians out into the streets were met with violent repression including large-scale detentions of an estimated 30,000 protesters in all plus at least four deaths reported.

”I am one of the thousands of Belarusians who used to be afraid. An invisible wall of fear was built around us. This wall of fear held us back for almost three decades. But this year everything has changed. This year we united in our aspiration for change,” Svietlana Tsikhanouskaya declared in her acceptance speech.

The Belarusian democratic opposition wanted to recognise the role of every Belarusian who took part in the protests and in particular those imprisoned for reporting on the atrocities, among them Tsikhanouskaya’s husband Siarhei Tsikhanouski and her friend Maria Kalesnikava, as well as the victims of the regime, among them Aliaksandr Taraikouski and Raman Bandarenka.

Women victims of the Belarusian regime

Women have been particularly affected by the Belarusian regime’s violent crackdown and dire prison conditions that include abuse, torture and rape of political prisoners.

”All we are trying to achieve are open democratic elections. All we are asking is just to release the political prisoners and to cease violence against civilians,” Veranika Tsapkala said when speaking to the media after the award ceremony in Brussels.

By citing the disastrous conditions and the atrocities committed in prisons, she hoped to galvanize the international community to be vocal in its condemnation of the situation.

”The conditions where woman are held in particular are terrible”, she said. “Many women don’t get any medical support in the prisons. Women cannot even wash their hands.” Tsapkala appealed for support from Europe to aid women in particular. ”Women are the most vulnerable to the kind of torture that the regime uses now, even in the 21st century.”

In his tribute to the Belarus opposition, European Parliament President David Sassoli promised that there would be a fact-finding mission in the coming months, involving both parliamentarians and other EU politicians.

”There will be a number of initiatives taken next year. The EP has to support these demands and show real support for the Belarusian people,” Sassoli observed.  Noting that the EU seeks  dialogue and discussion with the regime, he stressed that it stands on the side of those who are subjected to violence, imprisoned or deprived of their fundamental rights. ”Also as a whole the EU has to intervene in a determined manner.”

Sviatlana Tsikhanouskaya hoped that the award of the Sakharov Prize would mark a new beginning for Belarus. ”Everyone deserves this prize because everyone is fighting now against atrocities and violence in our country,” she stressed.

”We ask Europe and the whole world to stand with Belarus. Standing for human rights and democracy is not interference but is the duty of each self-respecting country.”

This marks the third time the Sakharov Prize has been awarded to Belarusian civil society. In 2004, the Belarusian Association of Journalists received the prize and in 2006, Aleksander Milinkevich, the then leader of the opposition in Belarus who stood against President Lukashenko in the 2006 presidential elections, won the prize.