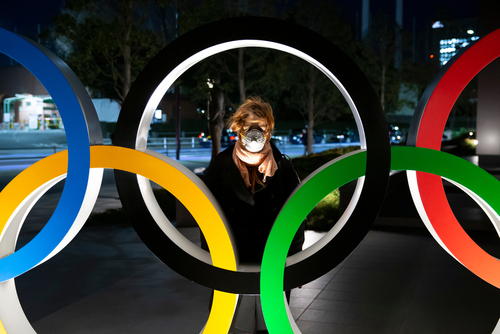 Tokyo/Japan February 27, 2020 The five ring symbol of the Olympic Games at Tokyo museum at night. Japan will host the Tokyo 2020 summer olympics and Paralympic.

Brussels (Brussels Morning) In a major political incident during the Summer Olympic games in Tokyo, a Belarus athlete has sought refuge in the Polish embassy in Japan’s capital in her quest to seek asylum.

Belarus sprinter Krystsina Tsimanouskaya claims she was forcibly taken to the Tokyo airport by team management on Sunday, following critical remarks she made about members of the national coaching team. Tsimanouskaya refused to board the plane that she had been led to and was quickly placed in protective custody by Japanese police.

Speaking to Reuters, the 24-year-old athlete said her coach came to her room in the Olympic village on Sunday. He told her he had received an order “from above” that she would have to leave, a day before she was scheduled to compete in the women’s 200 metre heats.

Tsimanouskaya had been openly critical of her coaching team because they had entered her in the women’s 400 metre relay race without prior notice or her consent. She noted that this was an event in which she had never previously participated.

According to the Belarus team management, the decision to pull her from the competition was made “on medical advice”, after she had experienced problems with her “emotional and psychological state”. Tsimanouskaya denies that she was ever examined by the team’s doctors during her stay in Japan.

On Sunday, she was offered visas by the Czech Republic and by Poland, enabling her to enter either country and seek asylum. Meanwhile, France’s European Affairs Minister, Clement Beaune, announced today that it would be “an honour for Europe” to grant her political asylum.

EU-Belarus relations are currently at their lowest point in decades. The EU implemented sanctions when earlier this year Belarus military forced a commercial plane to land on the pretext of a bomb threat, in order that the authorities could arrest a dissident journalist and his girlfriend.

Belarus’ strongman leader Alexander Lukashenko has cracked down hard on critical voices and civil liberties since national elections last year, which the EU insists were neither free nor fair. Hundreds of protesters have been arrested while opposition leaders have either fled the country or ended up incarcerated.